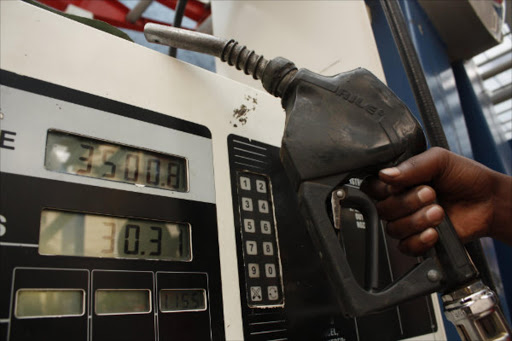 A fuel attendant busy at the Kobil petro station along Koinange Street yesterday,despite increase in fuel prices announced by ERC most stations had not adjusted the fuel price.Photo/Philip kamakya.

The government's appetite for higher revenue remains among the biggest causes of pain at the pump as Kenyans witness month-on-month rises in fuel prices.

The Energy and Petroleum Regulatory Authority  on Sunday announced new prices for the next 30 days. Super petrol, diesel and kerosene have increased by Sh7.63 per litre, Sh5.75 per litre and Sh5.41 per litre, respectively.

Consumers in some parts of the country are paying more than three times the cost of importing the products that are cheaper in landlocked countries. They use Kenya as an import route, despite the country enjoying direct imports to her Port of Mombasa.

Global crude prices have been recovering since hitting a low of $17.64 (Sh1,933) in April last year, at the height of the Covid-19 pandemic. Kenyans continue to be heavily taxed on petroleum products; retail prices are more than double the landed cost of products at the Port of Mombasa.

However, the three products will be retailing at Sh122.81, Sh107.66 and Sh97.85, respectively, in Nairobi, as Kenyans pay nine different taxes and levies on the products.

They include excise duty of  Sh12.95 per litre of petrol and Sh11.37 on a litre of diesel and kerosene.

Consumers are also paying Sh18 per litre of petrol and diesel as Road Maintenance Levy, Sh5.40 as Petroleum Development Levy and Sh0.25 per litre as Petroleum Regulatory Levy.

They are also paying Sh0.95 per litre of petrol as the Railway Development Levy, Sh18 per litre of kerosene as anti-adulteration levy and Sh0.03 per litre as Merchant Shipping Levy.

Import Declaration Fee takes Sh1.65 per litre of petrol while Value Added Tax (VAT) is Sh9.10 for petrol, Sh7.97 for diesel and Sh7.25 for kerosene.

This month, total taxes and levies on a litre of petrol amount to Sh57.33, which is Sh7.49 more than the cost of the product when it arrived at the port, meaning consumers are paying more taxes than the actual cost of the fuel.

Taxes and levies on a litre of diesel total Sh45.47 while those charged on kerosene add  up to Sh39.55.

Consumers also pay for distribution and storage charges, which include pipeline and road transportation from Mombasa, losses at depots and the pipeline and delivery costs ranging from Sh2.98 to Sh3.25 per litre.

Oil marketing companies take Sh12.39 per litre of the three products sold in Nairobi if they strictly stick to the prices set by the regulator, EPRA.

Last year, Petroleum CS John Munyes increased the petroleum levy from Sh0.40 to Sh5.40 per litre, a 1,250 per cent rise, effective in July.

In August, he snubbed the Senate Committee on Energy chaired by Nyeri Senator Ephraim Maina, which had invited him to explain the sharp increase of the levy which has caused pain to consumers.

The levy is expected to rise about Sh30 billion annually, up from Sh2.28 billion, with the Exchequer netting hundreds of billions from overall taxes and levies from fuel products.

So far, the ministry has collected over Sh20 billion from the levy.

Diesel is selling at Sh107.66 per litre, up from Sh101.91 a litre while poor households using kerosene for cooking and lighting are paying Sh97.85 to take home a litre of the product, up from Sh92.44.

A litre of diesel in Kampala is selling at USh3,700 (Sh110.71), slightly above pump prices in Eldoret currently at Sh108.40, despite Uganda importing the bulk of its products through Mombasa.

In Tanzania, motorists are paying an average of Tsh1,981 (Sh93.63) for a litre of petrol as consumers enjoy economies of scale on imports through the Port of Dar es Salaam.

Following public uproar on Monday about current fuel prices, the regulator defended itself, saying fuel importation is undertaken through the Open Tender System (OTS) in accordance with Legal Notice No. 24 of 2012.

It said computation of local petroleum pump prices is based on product cost in the international market, storage and transportation costs, margins  and taxes and levies.

The agency blamed the hight tax regime for high fuel prices, saying that taxes account for 46.7 per cent of the total bill of a litre of petrol, 42.2 per cent for diesel and 40.4 per cent for kerosene.

Kenya was pushed into a corner in 2018 by the International Monetary Fund to impose VAT on petroleum products, among other conditions, to renew a $1.5 billion about (Sh150 billion) Standby Facility that was to expire that year.

The VAT on fuel, cutting down on government spending and removal of caps on bank interest rates were among the conditions Kenya had promised to meet to continue enjoying the facility that serves as an insurance policy for lenders.

Although the Parliament overwhelmingly passed the bill into law, setting the stage for a 16 per cent VAT on fuel, the public uproar saw MPs retreat, slashing it to eight per cent.

Households are staring at a likely increase in the cost of transport and goods as fuel prices jump.

On Monday, manufacturers warned of an imminent increase in the cost of goods, a move that will punish households already struggling with reduced earnings, low returns from businesses and joblessness caused by the Covid-19 pandemic.

The Kenya Association of Manufacturers said the country does not have a reliable and good quality source of energy, forcing manufacturers to turn to alternative sources, including generators to continue with production.

Additionally, the sector relies on petroleum products to distribute goods across the country.

The Kenya Transporters Association has also projected a possible increase in the cost of goods as transporters pass on the cost of fuel to cargo owners, and ultimately the consumer.

“There is a likeliness of seeing changes mainly with small transporters who depend on petrol stations to move from one point to another,” KTA chief operating officers Mercy Ireri said.