This, as SASRA moves to regulate non-deposit taking Saccos.

•CS Munya says there is a lot of mis-use of people's savings.

•He has warned Kenyans against investing in Ponzi Schemes– investment schemes that promise high short-term rates of return or dividends to investors. 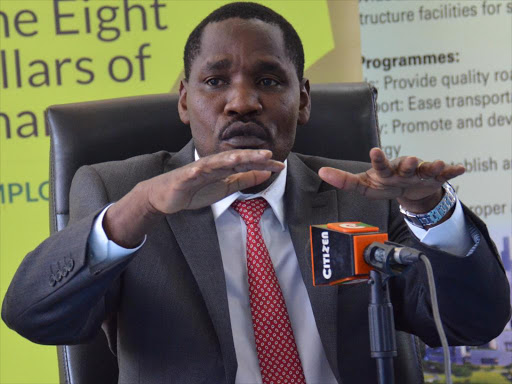 The government plans to reign in Savings and Credit Co-Operative Societies (Saccos) and weed out rogue players duping the public.

The Sacco Societies Regulatory Authority(SASRA) has given Saccos up to June 30 to comply with the Sacco societies (non-deposit taking business) regulations-2020, which took effect on January 1.

Non-deposit taking business (BOSA) in which the total non-withdrawal deposits from members is equal to or exceeds the sum of Sh100 million, will now be regulated by Sasra.

Diaspora Saccos with links to Kenya will also be policed by the regulator under the new law.

The Saccos have been instructed to provide critical information and business plans with SASRA for monitoring, in the next 30 days.

Those that fail to meet the June 30, registration deadline will be shut.

Yesterday,  Cooperatives Cabinet secretary Peter Munya warned societies duping investors, mainly farmers' and housing cooperatives which continue to swindle the public on land and housing plans, of dire consequences as the government plots a regulatory framework for them.

Some, he says are registered as companies to avoid regulation under laws governing Sacco's, but end up undertaking Sacco activities by mobilising funds, to purportedly buy land and develop homes for members.

Poor governance in these institutions, Munya said, has seen members lose hundreds of millions as some end up collapsing.

“Housing co-operatives and other entities in the Sacco business must be brought under regulations very quickly. There is a lot of misuse of people's savings,” the CS said, as he spelt other reforms in the ministry including streamlining the tea sector, diary, sugar and coffee sector to ensure farmers benefit.”

He warned Kenyans against investing in Ponzi Schemes– investment schemes that promise high short-term returns or dividends to investors.

“People invest in imaginary investments then end up losing. Before putting your money in any institution, make sure you do due diligence to find out if the entity is regulated and fit enough to invest in,” the CS said.

He spoke in Nairobi during a SASRA forum on the plans to bring on board non-deposit taking Saccos under regulations.

SARA is targeting to register at least 300 Saccos across the country, where there are at least 3,626 identified ones.

The other small Saccos whose deposits do not exceed Sh100 million will remain under the supervision of the county departments of cooperatives.

People invest in imaginary investments then end up losing. Before putting your money in any institution, make sure you do due diligence to find out if the entity is regulated and fit enough to invest in

“We appeal to non-deposit taking Saccos to comply with the requirements under the law,”SASRA chairman John Munuve called out yesterday.

SASRA regulates about 175 deposit taking Saccos in the country with a total member deposit base of Sh425 billion as of December, having grown from Sh381 billion in 2019.

Total assets for these Saccos, which cut across the private sector and government entities, were recorded at Sh622 billion in December, up from Sh526 billion the previous year.

During the period, Non-Performing Loans grew to Sh30.44 billion from Sh25.79 billion, partly blamed on effects of the Covid-19 pandemic on the economy and households.

Non-deposit taking Saccos have a loan-book of Sh136.8 billion.

The new regulations are expected safeguard customer deposit by among others, ensuring sound management of these entities and curb their collapse, while putting directors on check.