Kenya yet to meet its meat demand 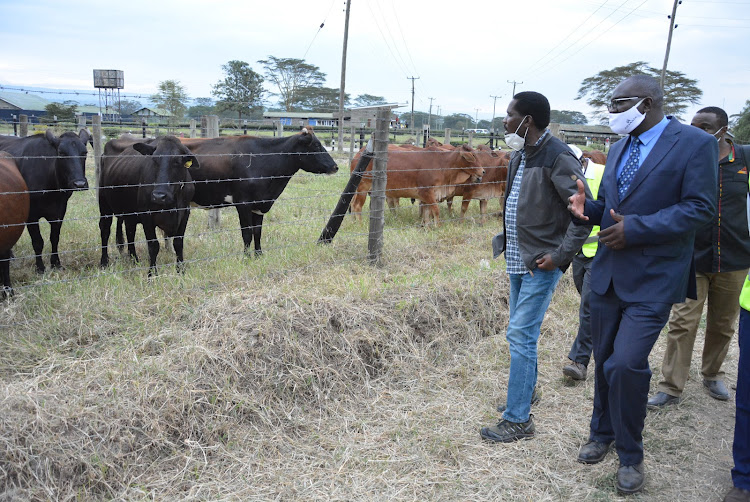 Kenya's meat demand outstrips local production forcing it to  heavily rely on imports, according to the Kenya Agricultural and Livestock Research Organization (KALRO).

Poor market infrastructure such as roads, water, electricity and insecurity has also affected the sector.

Kireger said the major constraint to the beef value chain is the low attention by the government compared to the dairy industry.

“The country imports the bulk of its beef products from neighbouring countries yet we have the potential of meeting our local demand,” he said.

He said beef farmers have little or no access to credit facilities and thrive on informal marketing channels where products are poorly handled.

“To increase profitability of the beef industry, we need to reorganise our marketing strategies, increase linkages of chain actors and enhance traceability of products,” he said.

Speaking at the KARLO farm in Naivasha on Monday, Kireger said that the research institution has come up with ways of improving productivity.

He cited the Sahiwal breed which was produced through crossbreeding and had come in handy in producing meat, milk and hides.

“Over the years, we have undertaken crossbreeding regimes between indigenous breeds like Boran and Sahiwal and we have seen an increase in production,” he said.

The DG said though Kenya is  yet to meet its local demand, it still exports beef breeding stock to Tanzania, Uganda, Rwanda and embryos to South Africa.

“Kenya is not considered a significant beef exporter although a minimal percentage of live animals are exported to Mauritius and Arab Emirates,” he said.

Kireger added that the national government through the Ministry of Agriculture was in the process of constructing an export processing zone in Taita Taveta.

“All livestock that will be exported from the country will pass through this centre to make sure that they are free of disease and of good quality,” he said.

Post a comment
WATCH: The latest videos from the Star
by GEORGE MURAGE CORRESPONDENT
Kenya
24 November 2020 - 04:00
Read The E-Paper