This led t reduced business activities in the region 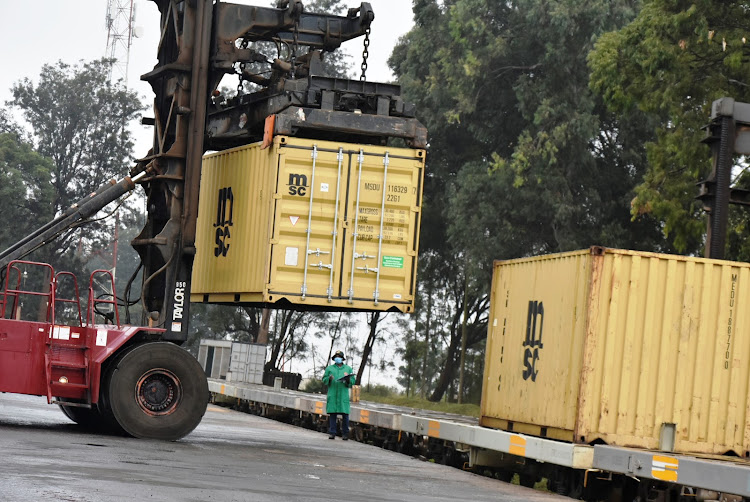 TRANSPORT: A container is loaded onto a cargo train at Del Monte Kenya Ltd in Thika on Friday
Image: /JOHN KAMAU

The Covid-19 pandemic has significantly cut off supply chains, hampering trade in East and South African countries, according to a report by Shippers Council of Eastern Africa .

This may be a result of the lockdown of international airspace by regional countries. Others like Kenya went ahead to lock inter-county land movements.

The report dubbed ‘Covid-19 impact on the supply chain in East and Southern Africa’, shows that the air and road sector are most affected at 53 and 37 per cent respectively.

The survey accessed three categories of players in the logistics sector: 37 per cent came from international firms, 42 regional roles and 21 worked at a national level.

"Across the region, measures introduced to minimise the spread of Covid-19 appear to have reduced airfreight capacity and impacted road transport capacity. Costs and lead-times were seen to have increased,’’ the report notes.

The drop in supply chain saw reduced business activities in the region as shown in the study.

Subsequently, this hampered human resources in the logistics sector, with the report noting overall reductions for staff capacity especially drivers (52 per cent) and warehouse and handling staff (57 per cent).

This may be attributed to stringent public health requirements for working environments and increased demand for qualified drivers.

According to the survey, 70 per cent of respondents indicated that lead-times have increased, with an average of 42 per cent indicating that they have increased by over 10 days – the maximum category in this survey.

Ten days was considered to be the point at which a delay would start to be a significant disruption on other segments of the supply chain.

The report notes that there was consistency in delays across the seven categories – but particularly for over 10 days in supplier manufacturing, availability of sea and airfreight, and customs and border issues indicate critical issues in core segments of various networks.

Available funds for operations were perceived to have reduced by 76 per cent of respondents. This indicates a drop in operating budgets.

“In the short-term, it is likely that this burden will negatively reduce the capacity of supply networks to continue operating,” the survey says.

It adds that in tandem with lower demand for services caused by reductions in the trade as well as higher costs for the same services, supply networks, in general, might see significant changes with some operators potentially pushed out of business.