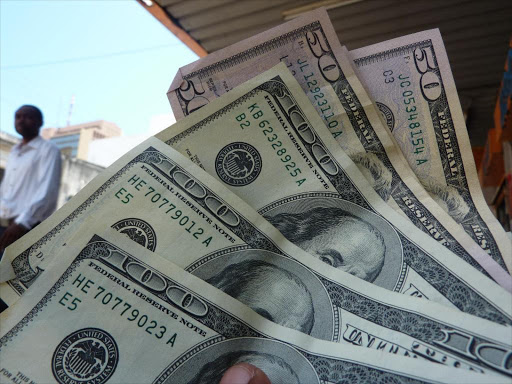 The US Dollar notes./ELKANA JACOB

The annual interest on Kenya's dollar denominated debt rose by Sh9 billion yesterday after the shilling dropped significantly against the greenback.

This, comes at a time when the country 's the external loan has grown four times in the past decade, according to World Bank.

The shilling continued to tumble against the US dollar, trading in the range of 108.85 by close of business after hitting a new historic low of 109.16 Monday.

At least 70 per cent of Kenya's debt is denominated in the greenback.

According to the annual Public Debt Management report by the National Treasury, the currency composition of Kenya's external debt stock comprise of the US dollar at 71.7 per cent, Euro at 14.9 per cent and Chinese Yuan at 6.17 per cent.

Others are the Japanese Yen at 4.3 per cent and the Sterling Pounds (GBP) at 2.6 per cent, while other currencies account for 0.3 per cent of the portfolio.

The shilling was trading 101 against the dollar when the global lender was compiling the decade data last year.

The latest statistics from the Central Bank of Kenya (CBK) however show the country's total debt hit Sh7.06 trillion end of August, with the external debt at Sh3.7 trillion.

The annual interest on the dollar-denominated debt will today be at Sh120 billion, considering the depreciating value of the local currency against the greenback.

The value of the shilling has in the past three months weakened against major currencies as people opt to store wealth in stable papers to cushion against Covid-19 economic turmoil.

In Kenya for instance, rich individuals seeking a safe haven for their wealth stockpiled a record Sh45.5 billion in dollars in the three months to May upon the country reporting first covid-19 case and imposition of restrictions to curb the spread of the virus.

Data by the Central Bank of Kenya (CBK) shows that foreign currency bank deposits held by Kenyans rose to Sh671.4 billion, up from Sh625.9 billion in February, one of the largest three-month jumps.

Dropping forex cover amid shrinking diaspora remittances, the biggest forex earner for the country is likely to further expose the shilling to further volatility.

Money markets analyst Bramuel Ashitiva said lack of enough cushion especially after the country's cautionary facility from the International Monetary Fund (IMF) expired in 2018 is likely to see the shilling close the week at 110 against the dollar.

''Importers' demand for the greenback is likely to pile more pressure on the shilling, a move that is likely to see it break the 110 ceilings before Friday,'' Ashitiva told the Star.

Importers and Small Traders Association of Kenya (ISTA) chief Nelly Muthoni said members bringing in commodities especially from the US, Europe and the Middle East are incurring huge costs.

''We have been spending much to import since the shilling started dropping against the dollar. The greenback is the major currency of trade especially when bringing in goods from the Middle East, Europe and the US,'' Muthoni said.

On the flip side, the weak shilling is sweet music  to the ears of exporters who are now earning more for their goods.

Jacktone Kilio of Pesa Consult insists that CBK has been inflating the value of the shilling.

''Currency manipulation from top-down and confetti print and mint are to blame. The dollar will collapse all paper currency soon enough,'' he said on Twitter.

CBK has numerously refuted managing the shilling, saying the value is market-driven.