•Management targets to send home 1,500 employees of the national airline.

•Pilots worried KQ might sink if its capacity is reduced as regional competitors, mainly Ethiopian Airlines which is expanding, and Turkish Airlines, remain the biggest threat. 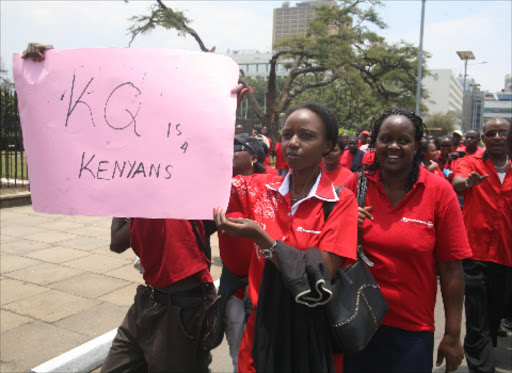 Kenya Airways plans to layoff 590 employees in the second phase of the exercise, Group Managing Director CEO Allan Kilavuka has indicated, even as questions over the budget to send home staff remains answered.

This is after serving at least 700 members of staff in the first phase(last month), with the entire process targeting at least 1,500 employees- pilots, cabin crew, technical department among other sectors.

At least 182 pilots and more than 400 cabin crew are facing job losses, the star has established, raising questions over the future of the carrier which is in the process of being nationalised.

It is also not clear how the loss making carrier will let go staff with full benefits when it is struggling to pay salaries, with only about Sh4 billion extended to the carrier by government to sustain operations for the next four months.

In letter to staff, Kilavuka has blamed low business in the aviation industry which has globally been affected by Covid-19, that has significantly cut travel and revenues, leaving airlines struggling to remain afloat.

According to Kilavuka, recovery is estimated to take at least three years.

KQ resumed domestic flights on July 15 while international flights returned on August 1, albeit on low frequencies.

The domestic travel average load factor in the first week of operation was 56 per cent, which dipped slightly to 49 per cent.

This has gradually risen to 59 per cent in the last week while the international load factor is currently at 37 per cent, Kilavuka notes.

“Our situation continues to be extremely difficult. Last month we began the difficult but necessary process of rightsizing the organisation. The rightsizing process began with the relooking of our network. We have reduced the destinations and our frequencies to match anticipated demand,” Kilavuka says.

“The next phase of the staff rationalization actions will see some staff in the various departments across the organisation declared redundant. This phase is expected to impact about 590 members of staff,” he notes in his letter.

He says the airline is also reducing its assets including the fleet size.

“We are doing this because we will not be able to afford to run the current size of operations based on the anticipated revenue. This is why it is also necessary to rationalise the staff size,” he said.

He said operatons will continue at a reduced scale with an extremely lean network, which will continue for the “foreseeable future.”

The staff shake-up is expected to be concluded by September, Chairman Michael Joseph told the Star in a recent interview.

exercise meant to cut on cost
Business
1 year ago

“I don't know what the eventual number will be but it is a tough thing to do. Nobody wants to be laid off and nobody wants to do lay-offs. It is really tough to let people go,”Joseph said.

The decision to lay-off staff has however been protested by the Kenya Airline Pilots Association (KALPA) and the Kenya Aviation Workers Union- KAWU, with the  Central Organisation of Trade Unions (COTU) also voicing its concerns.

KALPA has since written to President Uhuru Kenyatta, saying reducing the airline’s size could sink it as competitors take up its market share.

The workers' lobby groups have also questioned why management is sending home staff when nationalisation of the airline, currently in Parliament, is expected to turn-around KQ and grow the country's aviation industry.

Past and current management and board have been blamed for poor decision making which has left the airline in losses.

Last month, COTU Secretary general Francis Atwoli called on the government to reshuffle the management so that young people can take over management of the firm.

“The board is composed of people who have outlived their usefulness. They should be at home and allow people who understand modern dynamics to take over,” Atwoli said.

Atwoli hits out at KQ board, threatens to sue over move to dismiss 182 pilots

'The board is composed of people who have outlived their usefulness' - Atwoli.
News
1 year ago
by MARTIN MWITA Business Writer
Kenya
13 August 2020 - 04:00