•CS Betty Maina however says talks with US will not undermine Kenya's previous agreements with regional and continental trading blocks.

•The government is pushing to secure a free trade pact ahead of the lapse of the African Growth and Opportunity Act (Agoa) in 2025. 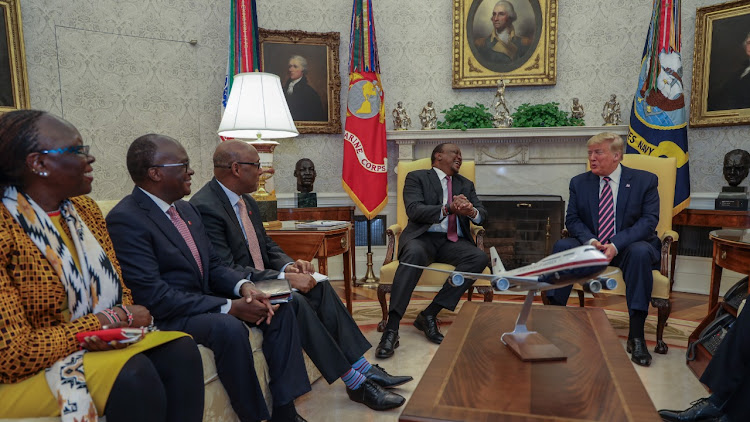 Kenya is proceeding with Free Trade Agreement talks with the US despite opposition by a section of African countries and  the East African Community (EAC) bloc.

The government is pushing to secure a free trade pact ahead of the lapse of the African Growth and Opportunity Act (AGOA) in 2025, which eliminates import tariffs on goods from eligible African nations.

The country is keen to secure market for its textile exports, clothing, tea, coffee and fish.  More than 70 percent of Kenya's exports are duty-free under AGOA.

"If we can only capture five percent of the US market for these products, we could increase our export revenue by more than two trillion shillings ," CS Maina sadding that the country hopes to conclude the deal within 12 months.

Kenya has assured the continent and her npartners in the East African Community that the deal, if secured, will not affect any existing trade ties.

However, those opposed to the deal view it as selfish and a threat to regional trade pacts.

Trade lobby groups also argue it will lead to the collapse  of  local industries and key sectors of the economy, on cheaper imports from the US market.

A number of trade lobby groups from five countries have urged the Kenyan government to postpone the talks to allow proper stakeholder engagement before sealing any deal.

The lobby groups from Kenya,Uganda, Tanzania, Rwanda and Nigeria are concerned the talks are undermining ongoing implementation of the African Continental Free Trade Area (AfCFTA).

The continental deal is aimed at accelerating intra-African trade and boosting Africa's trading position in the global market, by strengthening Africa's common voice and policy space in global trade negotiations.

“Coming at a time when the AfCFTA is on the verge of implementation, we feel this is the wrong move as it will undermine the progress made by African countries in negotiating to increase intra-regional trade,” the lobbyists say in a letter to the AfCFTA Secretariat, copied to the Kenya’s Trade Ministry, African Union and the Law Society of Kenya.

They further argue that the agreement poses the danger of crippling sectors such as agriculture and manufacturing and disintegrating Kenya's economy.

In agriculture, the US seeks to secure comprehensive market access for US agricultural goods, promote greater regulatory compatibility with US rules and establish specific commitments for trade in products developed through agricultural biotechnology.

The likely impact is that the agreement will likely affect food security as the ability of local farmers to produce will be limited by stiff competition from subsidised products from the US market, the groups says.

Further, it may limit the ability of the Kenyan government to regulate risky pesticides or agricultural technologies or even shelter local production from volatile prices or supplies, they note.

“It is important to note that concluding an FTA (Free Trade Agreement) with the US will have a negative knock-on effect on the integration efforts under the East African Community and the Continental Free Trade Agreement,” Edgar Odari, an official at Econews notes.

They want Kenya to delay defer the talks to provide more time to address key issues related to the FTA, among them the impact of the deal to Kenya’s economy, regional trade pacts and Area AfCFTA deal.

Kenya is counting on the deal to transform its economy.

“Under President Trump’s leadership, we look forward to negotiating and concluding a comprehensive, high-standard agreement with Kenya that can serve as a model for additional agreements across Africa," Lighthizer had said.

US Ambassador to Kenya Kyle McCarter has noted that the agreement if secured, will make Kenya more competitive and stronger economically.

Last month, President Uhuru Kenyatta reiterated that bilateral trade deal between Kenya and the US will not undermine the AfCFTA, but instead will be a win for Africa.

Uhuru defends trade deal with US, insists will not affect Africa pact

"Kenya will be the first under the new AfCTA so we are going to be trailblazers in this and we hope that others will also follow through," President Uhuru said.