Tax measure targets beers made from sorghum, millet or cassava

•Brewers to incur higher production costs should MPs approve the proposal to reduce remission of duty by 20 per cent.

•Cheaper beers were introduced to help the country counter effects of sale and consumption of illicit brew. 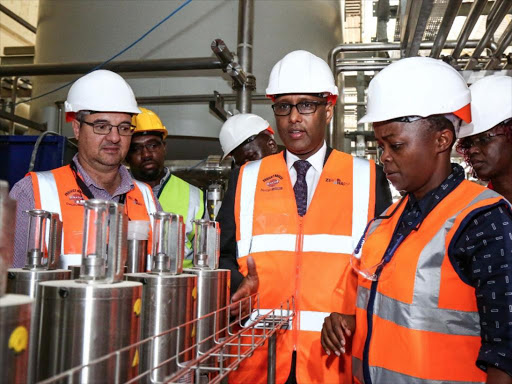 Brewers of Keg beer might be forced to increase prices to absorb the impact of the government's proposal to adjust relief on excise duty by 20 percent.

National Treasury Cabinet Secretary Ukur Yatani has proposed that the relief be reduced from 80 to percent to 60 per cent.

Concerned stakeholders and citizens have up to Friday to give their views on the proposal, according to public notice by the Treasury.

The proposed amendment to the Excise Duty (Remission of Excise Duty) Regulations, 2017, is set to be tabled in Parliament once public participation is complete.

Treasury is keen to the tax measure approved by June 30, the deadline within which it has to get approval for taxes before the 2020/2021 budget comes into effect.

With dwindling revenue prospects following the Covid19 pandemic, Yatani has forced to further raid the coffers of beer manufacturers and other alcoholic drinks.

Economists say the move would cause an increase in production cost for beer manufacturers, technically passed to consumers.

“This cost will be passed to consumers thus beer prices will go up,” he told the Star.

The government has been using the remission of duty to drive the production of affordable liquor in a bid to stamp out the illicit brew.

It is applied with respect to beer made from sorghum, millet or cassava or any other agricultural produce grown in Kenya.

The regulations do not apply to beer made from barley, sugar; and are extended only to companies who apply.

Manufacturers are required that the beers have at least seventy five per centum) content of sorghum, millet or cassava, or any other agricultural products.

Another relief was that the beers were not to cost more than Sh100 per litre, a situation that may drive many to harmful alcohol.

Manufacturers are also required to pack the beer in a pressurized container of at least 30 litres.

Beer manufactures are uncomfortable with the new measures citing a negative impact on efforts to mitigate the impact of illicit brew consumption.

Kenya Breweries Limited (KBL) in a memorandum by managing director Jane Karuku to Treasury CS Yatani says the proposed reduction will only exacerbate the problem of illicit brews.

It was estimated that illicit brew accounts for 490 million litres (44 per cent) of the total alcohol industry in Kenya.

Karuku said the trend of consumption during the Covid-19 period is characterised by the consumption of affordable beverages.

“We are concerned with the increase in illicit trade including the consumption of toxic surrogates such as hand sanitizers for consumers without access to affordable and quality alcoholic beverages.”

The KBL MD said they approximate Sh16.5 billion in economic losses and a risk of losing 150,000 jobs annually within the Keg value chain.

The beer maker said the tax measure would translate to an annual decline in KBL’s demand for sorghum grain by 13,674 tonnes.

“This is a guaranteed and permanent loss of income and jobs across the value chain going forward, without considering the impact of Covid-19,” Karuku, also Covid19 Emergency Response Fund Board chair, said.

She added that the decline in demand will lead to a permanent loss of Sh506 million annually in farmers’ income.

“…21,584 small scale farmers will lose their livelihoods and drop off the value chain.”

KBL further holds that by imposing the new tax change, the government would lose more revenue in return.

Karuku argues that whereas the government’s excise tax contribution on Keg will drop from Sh5.3 billion this fiscal year to Sh2.7 billion next year, tax losses amount to Sh5.8 billion.

She added that there would be Sh5.06 million loss in cess to county governments, Sh9.3 million annually in tax stamps revenue, and silo leasing income to NCPB.

Post a comment
WATCH: The latest videos from the Star
by MOSES ODHIAMBO Journalist and Political Writer
Kenya
05 June 2020 - 04:00
Read The E-Paper