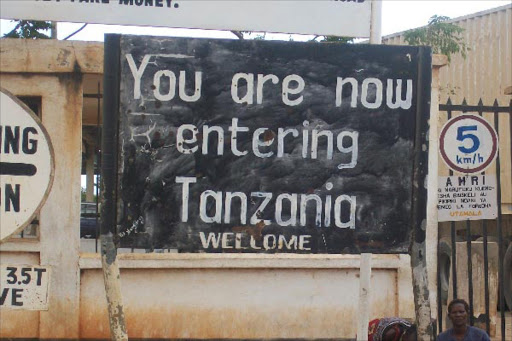 Entry point to Kenya at the Namanga border on the Tanzania side. Photo/Joseph Jamenya

The closure of the Kenya-Tanzania border will negatively impact Kenya's export earnings, as the country is among Kenya's top export destinations.

EAC and Regional Development Cabinet Secretary Adan Mohamed said Kenya's exports to its EAC partner states are likely to drop 30 per cent this year as countries introduce strict measures to contain the spread of coronavirus.

“Trucks that normally take three days to move from Mombasa to Kampala now take eight days. If this continues for up to six months the drastic will affect the demand side as well.” Mohamed said.

On Monday, Tanzania barred Kenyan trucks a day after President Uhuru Kenyatta ordered the closure of the common border - except for cargo vehicles - with its southern neighbour to curb the spread of coronavirus.

In April last year, trade officials from the two countries held bilateral meetings in Arusha to try and resolve contentious trade issues, including rules of origin for some products and persistent suspicion over the quality of products traded across the borders.

James Kiio, a regional trade expert questions why Kenya and Tanzania are always in contention yet they import the bulk of their goods — not from each other — but from the more developed economies.

‘’Should it be trade imbalance that the neighbours are concerned about, and then they are focusing on the wrong targets. What appears to be happening here is clearly a pure struggle for regional hegemony,’’ Kiio said.

Chief executive officers of National Private Sector Apex Body Associations in the EAC region have asked member states to ensure cargo seamlessly flows without and where a relay system and transshipment of cargo is adopted, the process does not lead to exorbitant costs that could adversely affect transporters and consequently consumer.

They appealed to the National Transport Associations coordinated by the Federation of East African Freight Forwarders Association (FEAFA) to work closely with EABC to ensure the private sector coordinated approach for smooth movement of cargo across the region.

Post a comment
WATCH: The latest videos from the Star
by CYNTHIA ILAKO AND VICTOR AMADALA
Kenya
20 May 2020 - 04:00
Read The E-Paper