Sang says companies have been allocated whole berths 4 and 7, but KPA denies this.

• KPA management said the arrangement of berth 4 is tied with the existing License Agreement dated December 17, 2002 for handling of grain and fertilizer by the private sector on lease basis. 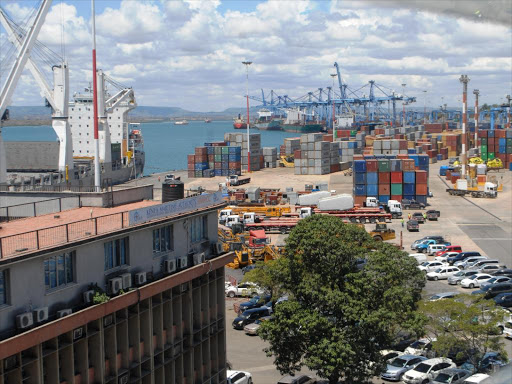 The Kenya Ports Authority has denied claims there are plans to privatize the Mombasa port.

In a statement, Wednesday, the KPA said Berths 4 and 7 are not under private ownership as alleged by Dock Workers Union.

The families, the union claimed, already have major interests at the port.

“Before being trade unionists we are Kenyans. We cannot allow port resources to be transferred to four families in Kenya,” said Sang.

However, KPA said the arrangement of berth No. 4 is tied with the existing License Agreement dated December 17, 2002 for handling grain and fertilizer by the private sector on a lease basis.

“Berth No. 7 has not been transferred either. What was leased out was shed Nos. 7 and 8 to a private operator,” said KPA.

It said the berths remain common user facilities and that they have every right on which vessel to berth as well as securing all charges and rendering services to all customers.

However, Sang said the management has been working in isolation, failing to consult the union for workers’ input.

“This kind of arrangement is what brings friction,” he told the Star on phone on Wednesday.

He claimed the latest family to be roped into the deal has been awarded a cargo verification tender through proxies. The union is demanding the cancellation of the tender.

Sang said the services are mainly rendered at the Nairobi Inland Depot for now but they fear it will soon be extended to Mombasa.

“This is a clever way of privatizing the port. We fought against it and won and now they are using clever ways to slowly but surely private crucial services,” he said.

KPA said the process of outsourcing of labour for cargo verification was done through a public tender with a view to streamlining the verification process.

The management said this was necessitated by occasional importers misdeclaration of goods, a major Kenya Revenue Authority security concern.

“The outsourcing is in tandem with the management‘s corporate strategy of outsourcing non-core services,” said KPA.

But Sang insisted that the verification can be done by dockworkers, arguing that the private firm that won the tender uses 75 per cent of the authority’s resources while keeping 100 per cent of the profit.

On this KPA said: “The allegation that the private firm is using 75% of KPA resources is misleading as the charges are only for stripping, stuffing and re-stuffing of goods inside the targeted container, subject to a client request.”

The management said the verification charges are as provided in their current tariff clause 14.11 which also guides charges raised by all Container Freight Stations in Mombasa.