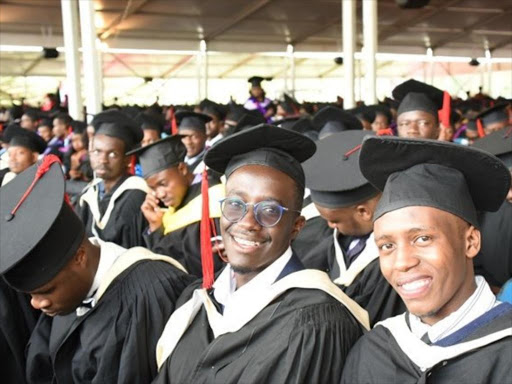 UON students during the graduation ceremony at the college's main campus on Friday, September 14, 2018. /COURTESY

“Due to the current crisis, my clients have reduced the price. Now the current price is CPP(cash per page) of 300 and a total number of words per page is 300 words and not 275 as it was earlier.”

This was a message sent to a group of 'academic writers' in Nairobi.

“Let me know if you will still be interested,” the sender concluded.

Kenya is one of the leading countries in terms of doing online university assignments for those in the US and UK, commonly referred to as 'academic writers.'

This has been blamed on lack of employment where thousands of graduates have been forced into the trade, in an industry estimated to be worth more than$1 billion (about Sh106.1 billion).

February to May is normally a 'high season' for this business, which despite being seen as cheating, has employed thousands of Kenyan university students and graduates.

Some fully rely on these contract academic writing as a main source of income.

“I was introduced by a friend on campus who had an account. After graduating, I searched for a job but in vain. I decided to fully focus on academic writing which is feeding me to date,” explains Sam, who graduated from Kenyatta University in July 2016.

Sam earns between Sh100,000 and Sh170,000 a month, depending on the amount of work forwarded and delivery speed.

He does not own an account hence depends on an 'employer' or the account holder, who pays him per page.

Earnings vary depending on ratings of an account, wording contracts and how much one pays his or her writers.

Zachary, an account holder revealed to the Star he could make even a million on a good month. He, however, pays his team of writers whom he bids and assigns the work to.

“I normally have between 10 and 15 writers. Almost half of my earnings go to writers,” he says.

Low disposable income in key markets of the US and UK is, however, threatening to dampen the business with local writers facing a bleak future.

“My manager told me he can only pay Sh250 per page. High seasons we earn up to Sh450 per page,” explains Linda, a writer and resident of Kasarani.

According to Robert Korir, an account holder, clients in the US have asked for a reduction in price per page, as many students cannot part with what they used to.

“They are blaming it on the coronavirus which has affected their economy. I have to reduce what writers get because my bottom line is also going down,” Korir said.

A survey by the Star indicates most local account holders are now paying between Sh250 and Sh300 per page.

They make between Sh600 and Sh700 for every 300 words from foreign essay companies.

During low seasons, the price averages Sh225 per page with the high season earning writers up to Sh460 per page.

High seasons are February–May and September to mid-December.

“These are the times when university students abroad are busy with classwork. A huge number opt to pay to have their assignments done,” notes Francis Kioko, a writer based at Roysambu, Nairobi.

The good command of English and thousands of unemployed intellectuals make Kenya a lucrative market.

Economic hurdles in the foreign countries are however threatening to hurt some of these businesses, which have survived a test of time, including efforts to shut them and closure of payment modes.

The UK government has been pushing to stamp out the use of 'essay mills' by its students.

These are websites that allow students to pay other people to write their papers.

More than 40 university chiefs are reported to have written to the education secretary calling for a ban on so-called essay mills.

Ireland, New Zealand, Australia and 17 US states have been keen on banning essay mills.

Players in the field are however using anti-plagiarism software to come up with untraceable work.

In April last year, US online payment giant PayPal said it will no longer process payments by essay-writing firms that sell academic papers to university students.

The US is Kenya's top market for online writers according to local trends.

The move affected thousands of Kenyans but the business has continued as usual as they moved to other payment platforms, including banks.

“The global fintech is evolving every day so there is no way you can totally ban payments across borders,” explains Titus Mirema, a Nairobi–based IT expert.

The thousands of university students and graduates are now hoping the economies of these countries will not fall deeper due to the pandemic, which will further hurt their earnings.