KQ has been forced to ground its 36 aircraft which includes nine Boeing 787 Dreamliner s, 10-Boeing 737 aircraft and 17 Embraers. 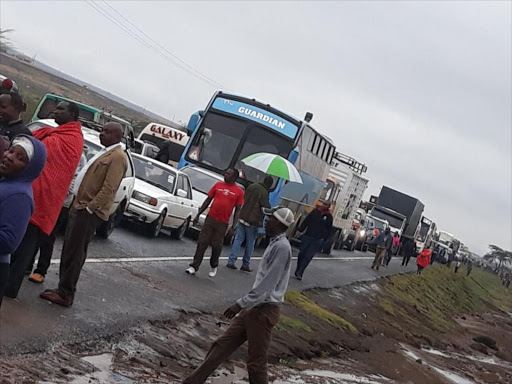 Motorists stuck on Nairobi-Nakuru road after an accident caused a traffic jam on Sunday. /COURTESY

The country's transport sector will miss out on an average Sh40billion in the next month as the government puts the Nairobi Nairobi Metropolitan Area and coastal Counties of Kilifi, Kwale and Mombasa on lockdown.

With the ban on international flights, suspension of domestic flights by airlines and reduced operating capacity of Public Service Vehicles(PSV) on the ongoing curfew and anti-coronavirus measures, operators are counting losses.

The most hit is the road transport sector where up to Sh840 million is lost daily.

According to the Matatu Owners Association chairman Simon Kimutai, over 60,000 matatus and buses operate on a normal day, each raking in an average Sh15,000.

This means the industry’s gross earnings amount to more than Sh1.05 billion on a daily basis, translating into more than Sh30 billion a month.

With the government directives on social distancing, workers to operate from home and the recently effected 7 pm to 5 am curfew, the public transport industry has suffered a major blow with earnings dropping by between 70-80 per cent.

“Social distancing took away 40 per cent of the business. The curfew came in and gave it (sector) a knockdown. And now restricting movement into and out of Nairobi and the coastal counties. The sector is on its knees,” Kimutai told the Star yesterday.

He, however, said the sector is in support of the fight against the spread of COVID-19, but the government should consider subsidies and recovery measures for the sector.

Long-distance operators linking major towns of Mombasa, Nairobi, Kisumu to other parts of the country and the region have suspended operations.

“We have suspended all bus operations. Everybody is on leave for 21 days apart from a few people handling parcels. We support the fight against the spread of the virus. we need to manage it and go back to normal business,” said Lennox Shalo, general manager-Mash East Africa.

On the rail, the Kenya Railways has suspended all passenger trains on the SGR from Mombasa to Nairobi.

With more than five major local airlines slowing down operations, the sector is looking at a possible Sh10 billion or more in lost revenue.

In a statement, Jambojet which also has regional routes of Kigali and Entebbe has asked customers to re-schedule their travel plans to a later date at no extra cost, saying the value of tickets booked remains valid for a period of 12 months.

'' Jambojet will temporarily suspend all its operations from April 7-30,’’ the carrier said, “'' We, therefore, regret to inform all our customers and business partners that all the flights for the said period are canceled with immediate effect’’.

It suspended flights to Rwanda and Uganda mid-last month due to the virus.

Fly540, on the other hand, has suspended its flights “until further communication on April 26,” it said.

National carrier Kenya is, however, the most individual hit entity, as it stares at an average Sh7.1 billion in lost revenues in the next one month, as the ban on the suspension of international flights continues for another 30 days.

According to its financials for the period ended June 30, 2019, the airline made Sh42.6 billion in passenger revenue. This translates to an average of Sh7 billion a month and Sh236 million a day.

With international flights accounting for about 92 per cent of the airline's revenues. Passenger revenue being lost on ceased international operations during this period averages Sh217 million.

KQ has been forced to ground its 36 aircraft which includes nine Boeing 787 Dreamliner s, 10-Boeing 737 aircraft and 17 Embraers.

“We will have to place 50 per cent of our aircraft on long term storage while the rest will undergo maintenance,” CEO Allan Kilavuka said.

Management has written to the government seeking a bail-out.