There has been high levels of evacuation by foreign governments, mainly UK and Germany, which have repatriated their citizens. 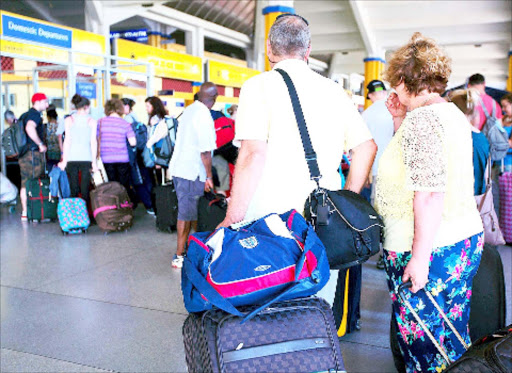 British tourists queue to check out at Moi International Airport in Mombasa on Friday.Photo/File

Hundreds of hotels, villas, and camps face closure as tourists exit and keep off the country over the coronavirus pandemic.

Industry players say most hotels, mainly at the Coast and other tourist destinations will shut in the next two weeks, putting jobs and the entire supply chain at risk.

According to the Kenya Association of Hotelkeepers and Caterers(KAHC), hundreds of foreign visitors have left the country in the last one month or so, with most hotels in Mombasa, Diani, and Malindi losing up to 80 per cent of their guests.

Foreign governments, mainly the UK and Germany have repatriated their citizens.

Others have been forced to cut short their stay and fly back home as the availability of flights continues to reduce with increasing travel restrictions by countries. Hotels have also reported hundreds of booking cancellations.

“We are looking at empty hotels in the next two weeks, KAHC executive officer Sam Ikwaye told the Star, “The industry is not looking good.”

Starting next week, the majority of the hotels in the beach and holiday destination will average 10 per cent on occupancy, KAHC has warned, putting an abrupt end to the March-April high season.

In the Tsavo-Amboseli region, hotels are grappling with occupancy of below 15 per cent with some remaining empty.

At the two Sarova facilities within the Tsavo National Park, occupancy averaged 20 per cent with only 15 visitors checking in on Wednesday.

Baobab Beach Resort in Diani reported 70 per cent occupancy up to today (Friday).

Next week, the hotel which has three luxurious properties – The Baobab, The Maridadi, and Kole Kole, is expecting occupancy of 40 per cent according to general manager Sylvester Mbandi.

“Europeans are leaving and none is coming in, few locals traveling but groups in April are canceling. The hospitality industry is in darkness,” Mbandi said.

He said with a shut down of fights, the industry is in ICU.

Kenya Tourism Federation(KTF) has said 98 per cent of international tourists have left the country, making the closure of hotels a reality.

Closure of hotels is expected to hurt the agricultural sector (food supplies to hotels), transport sector (tour operators and public transport), entertainment sector, support services among others, with a massive loss.

“It is bad. This crisis is far bigger than tourism. The whole world is heading to a shutdown,” Hersi said.

A slow down of the tourism sector will jeopardize this year's economic growth as the sector remains a key contributor to the GDP.

Tourism CS Najib Balala had earlier this year projected a more than 10 per cent growth, banking on political stability, security and ongoing infrastructure development across the country to support the sector.