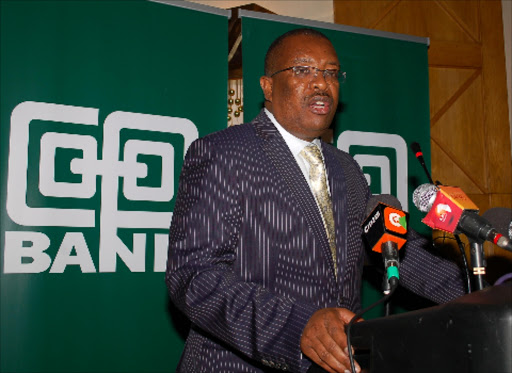 Latest outlook by Securities Africa Kenya shows bottom lines for local lenders will grow by an upside of almost 15 per cent, with Cooperative Bank Group expected to lead the pack with a profit after tax growth of Sh14.51 billion, signaling 14 per cent growth compared to Sh12.7 billion last year.

The bank's gross earning for the year is expected to rise 6.7 per cent to hit Sh59.6 billion up from Sh55.9 billion, mainly driven by improving efficiencies.

The gross profit will likely  grow by 15.3 per cent year on yea to Sh20.7 billion in results to be announced mid March  with the effective tax rate remaining unchanged at 30 per cent.

Securities Africa also anticipates that the bank will report stronger interest income growth of above  12.2 per cent , following the repeal of the interest rate cap.

''This growth will be largely on the back of consumer lending as well as from SMEs and the agricultural sector,''the report said.

Other tier one lenders like KCB Group, Equity Bank, Standard Chartered and CFC Stanbic which recorded net profits of Sh24 billion, Sh19.8 billion, Sh8 billion and Sh6 billion respectively last year are expected to be on pedestal heading into 2020/21.

Financial results to be announced in March will be a huge improvement compared to what lenders registered in 2018/19 where the sector’s total income grew by a modest 3.3 per cent, according to Central Bank of Kenya's (CBK) supervision report.

Kenyan banks’ total pre-tax profits hit a record high of Sh152.3 billion in last financial year, a turnaround from a 4.8 per cent decline in 2017, largely buoyed by increased interest income on government securities, with the top banks investing heavily in Treasury bills and bonds.

The enactment of interest cap law that limited commercial lending rates at four per cent above CBK's bench mark rate sent panic among investors in the banking sector as returns dwindled.

Share prices for bank stocks at the Nairobi Securities Exchange (NSE) nosedived, forcing fund managers to redirect investments to other channels, with government securities reaping huge from the uncertainty.

Even so, Securities Africa has projected better future for the sector with share prices for listed banks likely to shoot almost 50 per cent.

For instance, it has projected Coop Bank's share price to rise by 48.6per cent to Sh22.30 from current Sh15.

The sector analysis by Investec Bank of South Africa released last week said bank in Kenya are tipped to continue offering lucrative returns to investors after the removal of interest cap law in November.

It indicated that Coop Bank's share price had the highest upside potential at 14.2 per cent to a projected fair price of Sh17.30 from the current Sh15.15 while KCB is set to grow 12.9 per cent with an upside potential from Sh52 to Sh58.70.