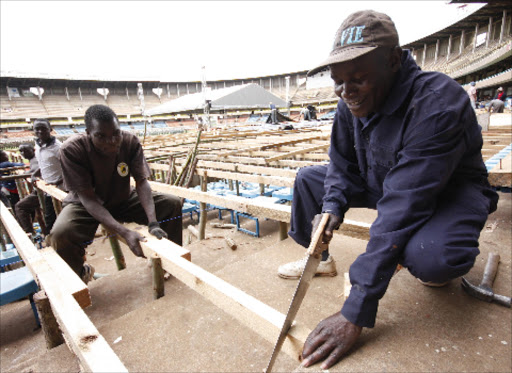 A carpenter cuts a piece of frame during the construction of the dias used during the swearing in ceremony of President elect Uhuru Kenyatta at Kasarani Stadium.
Image: CHARLES KIMANI

Mobile lenders have been urged to increase credit access to the informal sector with experts saying such a move by existing providers would go a long way in supporting underserved livelihoods like the Juakali sector.

“Statistics reveal that the informal sector is still underserved by banks yet there is a need for financial inclusion to activate the informal sector and support livelihoods of millions of Kenyans,” said George Abwajo, economist and Chief executive of GulfHub.

He believes such individuals who are considered high risk and low-profit demographic, have a crucial role to play in the country’s economy.

Most Juakali workers and small traders are not formalized and therefore lack collateral to take to financial institutions, and as a result, are often locked out on credit access by institutions like banks.

Duncan Motanya, the chief executive of Zenka, a Kenyan-based mobile money lender, said that mobile loans continue to make a difference to the sector and believe that there still exists untapped opportunities in the informal sector.

“These lending institutions have helped in bridging the gap by offering credit services to small businesses who could not access credit because they lacked the credit score or banking history," he said.

Also expected to trigger the growth of the sector is the push by Digital Lenders Association of Kenya (DLAK) to bring sanity in the mobile lending industry.

This indicated slowed disbursement to this sector and digital lenders helped bridge that gap.

Post a comment
WATCH: The latest videos from the Star
by SUSAN NYAWIRA Business Reporter and Journalist
Kenya
17 February 2020 - 04:00
Read The E-Paper