Naivasha Dry Port opens for cargo amid concerns about is viability 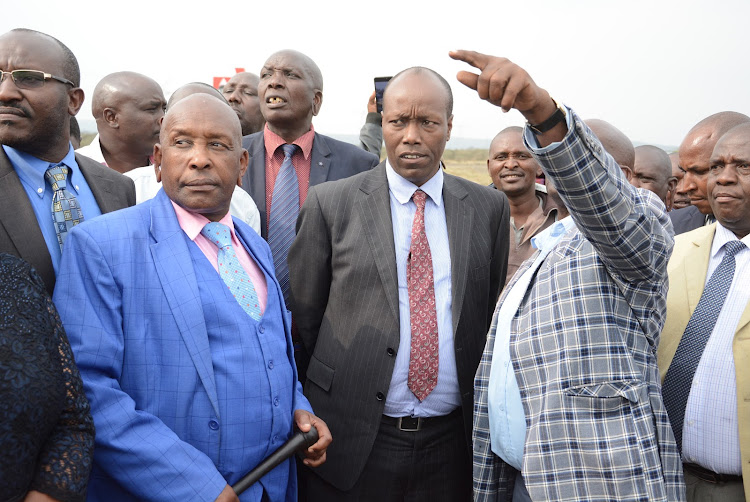 Dry Port Nakuru Governor Lee Kinyanjui (with red tie) has a word with members of the Maasai community when he visited Satellite area in Mai Mahiu Naivasha where the proposed Industrial park and Dry port will be located. The government has identified and gazetted the 1,000 acres where the port and the park will be located.
Image: George Murage

President Uhuru Kenyatta will today flag off the first cargo train to the Sh6.9 billion Naivasha Dry Port even as pundits question its feasibility and efficiency.

A statement from the  Presidential Strategic Communications Unit (PSCU) indicates the commissioning will be held at the Nairobi SGR Terminus in Syokimau.

On Friday, the contractor, China Construction Corporation (CCC) was working round the clock to beat the deadline. In November, the Kenyan government gave the firm 48 days to set up the Inland Container Depot (ICD).

''We are done with 85 per cent of groundwork. Today is the 47th day, we are working day and night to prepare the facility for launch early next week,'' deputy project manager Xu Jundong said.

He added that the facility on over 1,000 acres piece of land has the capacity to load two million tonnes of cargo every year.

The 2.6 kilometer concrete road linking the port to the main Mai Mahiu – Narok Road is complete.

Even so, pundits have questioned the rationale behind the dry port, with the extension of SGR from Naivasha to Malaba uncertain.

According to economist David Ndii, it makes no economic sense to ferry cargo from an ICD in Embakasi to Suswa, and then drive it back to main Nairobi- Nakuru Highway, 30 kilometers away.

In one of his regular column in the Elephant, the economist argues that the freight service will only make sense if the SGR project connects Kenya to Uganda.

Ndii explains that the bulk of the cargo that comes through the port of Mombasa is either destined for Nairobi, or is in transit to Uganda and beyond.

''After offloading in Nairobi, the only other logical line for rail freight is one that serves transit cargo, terminating at Kisumu or Malaba as the case may be,'' Ndii wrote in a column.

A shippers council official who pledged for anonymity because he is not official spokesperson is worried about efficiency and cost of doing business.

'' I was at the facility. The contractor has shipped automation equipment from China, meaning operations will be done manually for sometime. Why is the government in hurry to open the dry port?,'' he wondered.

He added that it makes no sense to ferry cargo from Nairobi to come idle for more days in Suswa, with owners incurring demurrage costs after day three.

Kenya spent Sh150 billion on phase 2A of the SGR project but is yet to secure funding to extend the railway line to Kisumu, then Malaba border.

In April, Uhuru went to China, hoping to secure $3.6 billion but the Asian giant declined, citing lack of feasibility. It asked Kenya to negotiate with Uganda.

The country however secured $400 million (Sh 40 billion) to rehabilitate the 120 year old railway line to Uganda.

Even so, the government insists that the project which features an inland container depot, railway Marshaling yard, logistics zone and public utility area will support SGR and is an integral part of the Naivasha Special Economic Zone.

just like the Embakasi dry port, the Naivasha facility will provide storage of cargo especially those destined for Uganda, South Sudan, Northern Tanzania, Rwanda, Burundi and Democratic Republic of Congo.

''This will relieve the Mombasa Port of congestion, create more space for handling more cargo, and improve efficiency, which would attract more trade, including transshipment business at the Mombasa Port,'' she said.

Kenya has also  donated land to Uganda and South Sudan to set up their dry ports in Naivasha.

Post a comment
WATCH: The latest videos from the Star
by VICTOR AMADALA Business Writer
Kenya
22 December 2019 - 16:07
Read The E-Paper