The period coincides with the change of guard at Times Towers. The new Commissioner General James Mburu took over from John Njiraini who had been at the helm of the tax authority since March 2012.

While assuming office, Mburu, who had served long as the commissioner for Intelligence and Strategic Operations, promised to crack the whip on tax evaders denying the country much-needed revenue.

A week before his appointment, he led investigations that saw KRA officials arrested for aiding tax evasion.

A case matrix from the taxman seen by the Star shows most of the suspected tax evasion scams were perpetrated in Mombasa, Nairobi, Eldoret, Kisumu and Nyeri.

"We call upon those who have not been complying with the law and therefore not paying their rightful share of taxes to come forward and do so. We encourage them to liaise with KRA offices and service centres countrywide. KRA is committed to guiding them in the process of determination and payment of taxes for the greater good of our country," KRA said in a statement.

"All we desire is that all eligible taxpayers make every effort to pay their rightful share of taxes. KRA is determined to pursue those who have deliberately chosen to evade taxes through various practices."

Kariuki and nine other persons from African Spirit and Wow Beverages were arraigned on August 9 for evading tax worth Sh36.52 billion while Keroche Breweries owners Tabitha Karanja and Joseph Karanja are accused of not remitting Sh14.4 billion.

Both have since denied any wrongdoing, with their cases pending in court at different stages.

Last week, the prosecution suffered a big blow in tax evasion case against Kariuki, when the High Court faulted the role of the Director of Criminal Investigations in the matter.

The KRA report further shows the new sheriff at the tax agency took to court 26 tax evasion cases in his first month in office, 30 in August and 38 last month. 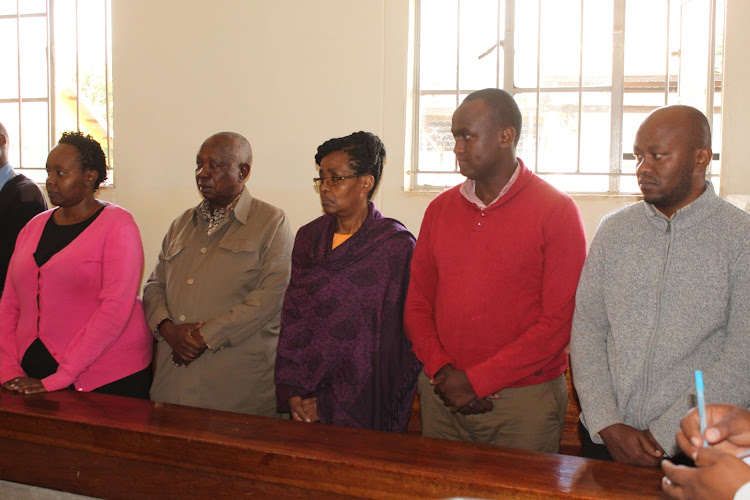 This month, already 58 high net tax evaders have been arraigned, perhaps an illustration of Mburu’s powered resolve to deal with tax evaders’ head-on.

Last month, two leading betting firms, Sportpesa and Betin, were forced to close shop in the country after they differed with KRA over tax.

Mburu’s effort is complemented by a vibrant clique of new department chiefs, among them Kevin Safari, commissioner Customs and Border Control, who has vowed to eliminate illicit cross-border trade through technology.

In September, Safari told the Star he is banking on hi-tech surveillance and automation to grow customs revenues by more than Sh110 billion to hit Sh610 billion this financial year.

“We are working towards limiting illicit trade by blocking any porous [borders] within our systems. As we invest in hi-tech scanners, tracking devices, and real-time monitoring equipment, criminals are on the lookout. We won’t give them a chance,” Safari said.

Speaking to journalists during the East Africa Tax Investigators forum held in Nairobi early this month, KRA’s commissioner for Investigations and Enforcement David Yego said they are collaborating with local and neighbouring country enforcement agencies to deal with the growing cases of illicit financial flows.

He said the agency is planning to charge 600 suspected tax evaders this year as it moves to recover lost revenue.

He added that KRA is reviewing tax agreements Kenya has with other countries in order to seal loopholes that aid illicit financial flows like transfer mispricing and tax avoidance.

"East Africa Community continues to lose much-needed revenue courtesy of loose legal channels like double tax agreements. Tax investigators are going to screen them to ensure that no revenue is lost,’’ Yego said.

Accused of 10 counts of tax fraud, DPP orders them to appear in court.
News
7 months ago

He spoke during the East Africa regional meeting for commissioners of investigation and enforcement in Nairobi that attracted delegates from Kenya, Uganda, Rwanda, Burundi and Tanzania.

According to the Africa Tax Justice Network, Kenya has been losing $400 million (Sh40 billion) every year since 2011 through illicit financial flows.

This, even as KRA continues to miss its tax targets, forcing the government to turn to borrowing to fund budgets.

Last year, the taxman missed its target by Sh250 billion, collecting Sh1.44 trillion against its original target of Sh1.69 trillion.

The deficit of 7.4 per cent forced National Treasury to borrow Sh891 billion during the period, pushing up the country’s public debt to Sh5.8 trillion by the end of the 2018-19 financial year.

The amount lost through tax evasion this year so far is slightly over a quarter of what KRA missed last year. The taxman is expected to collect Sh1.8 trillion in the current financial year.

Oxfam International estimates that Africa loses at least $50 billion every year in illicit financial flows, an amount higher than what the continent receives in foreign aids annually.

In August, the tax agency released a new tax investigation framework that could see anyone who blocks its officers from carrying out their duties under the tax laws risk being fined up to Sh1 million or going to jail for up to three years.

In the new framework, KRA said investigations would be undertaken with or without taxpayers' cooperation.

Failure to register or deregister for tax purposes will lead to a penalty of Sh100,000 per month but not more than Sh1 million

Furthermore, failure to retain records and documents will make the taxman penalise you 10 per cent of the amount payable to which the document relates. Where no tax is payable for the reporting period, Sh100,000 shall apply as the penalty.

The omission of income from returns, under-declarations of income, or deliberately defaulting on an obligation imposed by a tax law will land you a fine of Sh10 million or double the tax evaded, whichever is higher or imprisonment for a term not exceeding 10 years, or both.

While tax avoidance is not a crime, aggressive profit shifting by exploiting tax policy loopholes denies the country billions in revenues.

To curb this, anyone assisting a taxpayer to create a tax avoidance scheme, or abetting or aiding a taxpayer to evade tax will be liable to a fine equal to double the tax evaded or to a fine not less than Sh5 million, whichever is higher or to imprisonment for a term not exceeding five years, or both.

KRA is also working towards reviewing Kenya's tax agreements with other countries in order to help the country fix tax avoidance loopholes.

Mombasa businessman to be charged with Sh1bn tax evasion

The two were charged with ten counts of fraud.
News
5 months ago