This is a 34.26 per cent increase from Sh1.43 trillion used to pay bills the same period last year.

• E-commerce transactions accounted for 89.45 per cent of all mobile cash transfers at Sh1.95 trillion 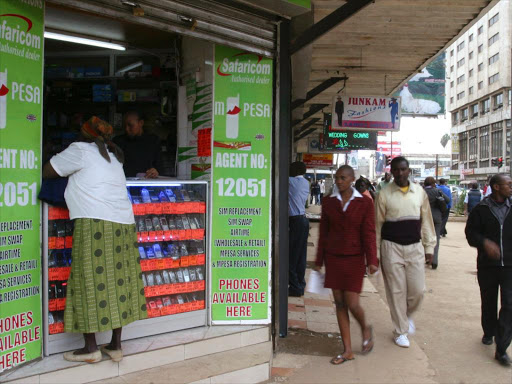 Pedestrians walk past an M-PESA shop in downtown Nairobi May 12,2009 as a customer makes a transaction./FILE

More Kenyans are leaning towards using mobile money to pay their bills as opposed to using hard cash.

In its quarterly report for the April-June period, the Communications Authority’s data shows 103 mobile money transactions are being carried out per second in the country, a rise from 92 e-wallet transfers the same period last year.

Over the review period, 75 of the 103 transactions per second went into paying for commodities and different utilities such as electricity and water bills.

The value of mobile money transactions grew 13.5 per cent over the April-June period to Sh2.28 trillion compared to Sh1.92 trillion the same period last year.

This means Kenyans moved Sh23.96 billion on a daily basis between April and June, translating into Sh16.64 being transacted digitally per minute.

85.71% of mobile cash transfers were used to pay for goods, services through mobile.
Business
3 years ago

The continued expansion of mobile payments in Kenya is driving the country closer towards becoming a cash-lite economy.

The value of e-commerce transactions accounted for 89.45 per cent of all mobile cash transfers at Sh1.95 trillion while person-to-person transactions were valued at Sh770.96 billion.

"A total of 591.1 million transactions valued at Sh1.9 trillion were made through the mobile payment platforms (Paybill and Till Numbers)," CA said in the report.

This is a 34.26 per cent increase from Sh1.43 trillion used to pay bills the same period last year.

On the other hand, person-to-person transactions increased by Sh95.37 billion to Sh770.96 billion.

At least Sh8.08 trillion was transacted in the form of deposits and withdrawals as well as mobile commerce transfers during the 2018/19 financial year, 94.06 per cent of the value of Kenya’s GDP at Sh8.59 trillion.

Telco giant Safaricom, through its M-Pesa platform, controlled 78.44 per cent of the mobile money market with transactions valued at Sh1.71 trillion.

Equitel commanded 21.55 per cent of the mobile cash industry over the review period with Sh469.86 billion worth of transactions.

CA data shows, both Airtel-money and Telkom’s T-Kash struggled to make headway in the mobile cash market cumulatively accounting for less than one per cent of total transactions at Sh843.95 million and Sh301.8 million respectively.

The continued expansion of mobile payments in which Kenya is a global leader has largely been at the expense of plastic card payments’ whose growth has been stagnant over the past few years.

Post a comment
WATCH: The latest videos from the Star
by CYNTHIA ILAKO Business Writer
Kenya
25 September 2019 - 20:07
Read The E-Paper