The Trading Economics projects unemployment rate in Kenya to rise to 10.5 per cent this year before slowing to 10 per cent in 2020

• Nine million individuals are expected to enter the labor force in a decade between 2015 and 2025. 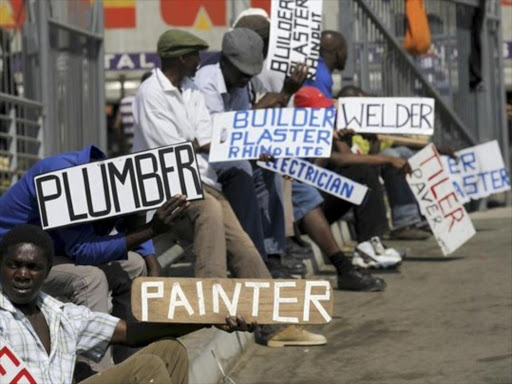 UNEMPLOYMENT Analysts polled by Reuters expected the unemployment rate to edge up to 25.3 per cent in the first quarter
Image: REUTERS

Kenya has to create at least 900,000 jobs annually between now and 2025 to absorb the high number of youths joining the job market, according to the latest World Bank report.

According to the report, nine million individuals are expected to enter the labor force in a decade between 2015 and 2025, further pushing up the country’s unemployment rate which stood at 9.3 per cent last year, according to Kenya Economic Survey 2019.

The ten year World Bank  survey projects unemployment rate  in Kenya to rise to 10.5 per cent this year before slowing to 10 per cent in 2020.

"This will contribute to a growing job deficit in the labor market in the future. Moreover, urban jobs are needed due to added pressure on urban labor markets from increasing urbanization,’’ the report says.

According to World Bank, 60 percent of the working age population in Kenya was employed in 2005, and this has increased significantly to 76 per cent, in 2015.

Despite the growth in jobs creation, the lender said the country is producing low quality jobs.

President Uhuru Kenyatta is in for a tough second term because of the myriad of challenges that seem to have worsened, polarisation and slow ...
News
4 years ago

It explains that agriculture is a low-productivity sector with high rates of underemployment.

Although the global lender has praised Kenya for increasing expenditure on job programmes every year, It said, the amount is still a very small share of GDP and overall government expenditure.

"Spending on job programmes in Kenya amounts to 0.3 per cent of government expenditure. Spending has stagnated at 0.1 per cent of GDP in recent years, limiting the reach of job programs,’’ World Bank said.

The rate is low compared to that of other lower middle income countries like Brazil and Ghana that have dedicated at least 1.2 per cent of GDP to such programmes.

Post a comment
WATCH: The latest videos from the Star
by VICTOR AMADALA Business Writer
Kenya
30 July 2019 - 05:00
Read The E-Paper