Six KTDA directors to pay Sh400,000 each or serve seven months in jail for contempt

• Six directors of Kenya Tea Development Authority (KTDA) have been fined  Sh400,000 each, for disobeying a court order two years ago. 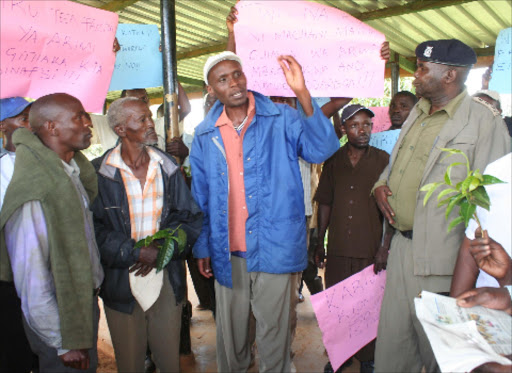 Kiriaini OCS Kipsaina Serem cool down furious farmers who were protesting against a decision by the disqualified director seats candidates to block the KTDA elections
Image: FILE

Six directors of Kenya Tea Development Authority (KTDA) have been fined  Sh400,000 each, for disobeying a court order two years ago.

The six were found guilty of contempt for interfering with the leadership and management of the 8,000-member Kiru Tea Factory in Murang’a County.

Court of Appeal judges William Ouko, Fatuma Sichale and Otieno-Odek ruled that the directors proceeded with an election, yet they had been stopped.

The court absolved eight other directors saying they found nothing to suggest that they violated a court order issued on December 6, 2017.

The court granted them seven days to pay the fine, after their lawyer Waweru Gatonye said they were not a flight risk.

Senior Counsel Paul Muite told the court that the directors should pay the fine from “their pockets and not from farmers”.

The judges said obedience of court orders is paramount and it is through obeying of orders that justice and fairness is served and the dignity of the court respected.

They rejected an application by the directors, seeking to stop the sentencing, arguing that they had filed an appeal at the Supreme Court.

Lawyer Benson Milimo,  said the appeal had been certified urgent by the duty judge and the file taken to the Chief Justice David Maraga, for directions.

The Judges said they cannot sanction parallel proceedings and the Supreme Court had not issued orders stopping the proceedings. They said the application seems not to have been made in good faith, but with plans to stall the case.

Last month, the Appeal court also dismissed their application where they were seeking a review of a decision that found them guilty of contempt of court.

The judges dismissed the application saying it lacked merit. They noted that the application was one of the many applications filed by the parties in the case, delaying the matter in court over the years.

“In penultimate, we note that the parties have taken deliberate steps to file application upon application in this matter whose practical consequence is to delay, derail and or scuttle substantive determination and conclusion of contempt proceedings,” the court said.

The judges warned that they will not entertain manifold applications that delay substantive hearing of cases and applications on merit.

The directors sought a review of the decision, which found them guilty of contempt of court in February, arguing that they were condemned unheard.

The tea factory has been plagued by incessant fights with a group led by  Chege Kirundi and vice-chairman John Ngari Kariri and auditor Christopher Mwangi accusing their rivals of trying to paralyse the operations of the firm at the behest of powerful individuals who are seeking to control the tea industry in the region.

They accused KTDA directors of orchestrating the removal of Kirundi and company secretary Bernard Kiragu on November 27, 2017, against express court orders.

Post a comment
WATCH: The latest videos from the Star
by CAROLYNE KUBWA Court Reporter
Kenya
05 April 2019 - 00:00
Read The E-Paper