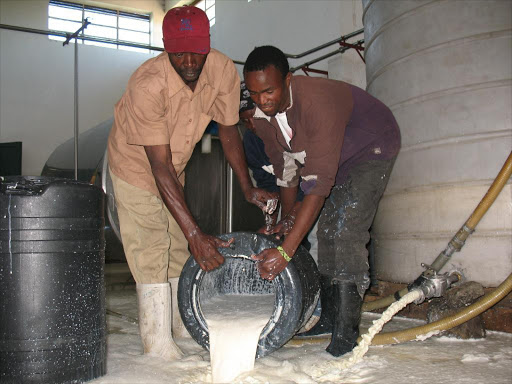 TOO MUCH: Workers pour milk delivered by farmers at Olkalou Dairy cooling plant due to oversupply.

More than 400 dairy farmers have objected sale of milk to processors, saying the move will lower their earnings by more than 50 per cent.

The Draft Dairy Regulations 2019 is set to restrict sale of fresh milk directly to farmers, requiring them to him to transport the produce to a cooling and pooling facility.

In a feedback to the drafted policy, farmers claimed that they were no consultations, and the move will cut benefits by half, for small-scale dairy farmers producing a combined 80 per cent of all milk in Kenya.

According to the farmers, an average smallholder farmer produces 12 liters of milk per day, out of which 10 litres are sold to his neighbours in other agricultural activities, while the other two litres used for household consumption.

Majority sell at Sh40 per litre, earning Sh400 in a day translating to gross month income of Sh12,000.

Currently, the milk processors buy a litre from farmers at Sh26 down from Sh32.

The farmers said that the move will force them to cover long distances to deliver their milk twice a day. This will cost them at least Sh200 both trips in transport expenses alone. Price paid for supplied milk will be around Sh25 per litre, if paid in time. This leaves them Sh50 daily, the farmers said in a statement.

If the regulations are passed, they will affect 70 per cent of milk sold across the country.

“Kenya Dairy Board’s declared goal of regulating 100 per cent of all Kenyan milk market will thereby rob millions of rural inhabitants of their livelihoods,” they added.

Post a comment
WATCH: The latest videos from the Star
by ELIZABETH KIVUVA Business Writer
Kenya
22 March 2019 - 07:17
Read The E-Paper