•Yesterday, Gakuyo filed restraining orders against the Commissioner of Cooperatives to surcharge them over alleged transfer of funds from Ekeza Sacco

•Last month, an audit report into Ekeza Sacco revealed that the evangelist and proprietor of Gakuyo Real Estate transferred Sh1.5 billion from the troubled Sacco to his personal account. 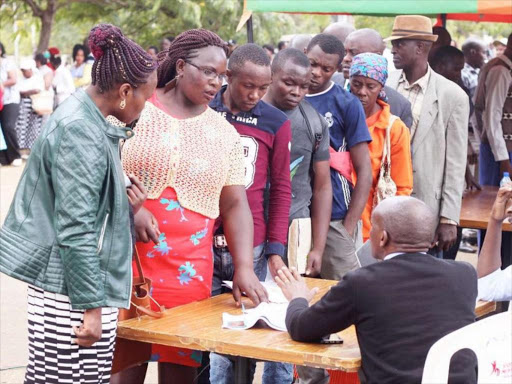 Members of Ekeza Sacco at a past AGM at Safaricom Stadium Kasarani. /DOUGLAS OKIDDY

The real estate company and the bishop yesterday filed restraining orders under certificate of urgency against the Commissioner of Cooperatives, Attorney General and Ekeza Sacco, saying recommendation to surcharge the firm based on audit report prepared by a team appointed by Commissioner for Cooperatives Mary Mungai is unprocedural and ill intended.

Last month, an audit report into Ekeza Sacco revealed that the evangelist and proprietor of Gakuyo Real Estate transferred Sh1.5 billion from the troubled Sacco to his personal account.

The report by the Commissioner for Cooperatives Mary Mungai led team said the transactions happened between 2015 and 2017.

The application made to High Court by advocate Simon Mbaru for Gakuyo Real Estate (1st Applicant) and David Kariuki Ngare (2nd Applicant) termed the audit report by Commissioner for Cooperatives (1st Respondent) as biased as applicants were not involved.

"The inquiry report prepared by 1st Respondent which is based on unprocedural, pre-meditated and did not adhere to cardinal rule of natural justice in the process ,arriving at the said decision to surcharge the ex-parte Applicants,’’ the application read.

The applicants say they were never given an opportunity to be heard in the inquiry proceedings which action violated their right to fair administrative action as provided under Article 47 of the constitution and the Fair Administrative of Action Act.

Furthermore, they urged that the intention to be surcharged is against February 20, 2019 inquiry report recommendation that Ekeza Sacco books audited within three months of the date of the report thus incomplete.

Gakuyo Real Estate further said it was never served with a notice to appear before the inquiry conducted by the 1st Respondent yet findings therein are adverse to it thus gross violation of the constitution and rules of natural justice.

This application is coming just a day after the Directorate of Criminal Investigations (DCI) asked members of the public from Nairobi and Kiambu counties who were allegedly defrauded by schemes connected to televangelist to record statements.

In a statement released on Wednesday, the office of the DCI acknowledged receiving numerous fraud complaints on three companies related to the controversial preacher-cum-businessman which include; Gakuyo Real Estate, Ekeza Sacco Limited and Gakuyo Investment Club.

The head of serious crimes unit Joseph Kariuki asked complainers to carry their financial documents and other evidence to Kiambu Road office on Monday next week.

The Sacco has been on a standstill since last year when the government revoked its license following complaints that it was sharing office space and bank accounts with Gakuyo Real Estate Company.