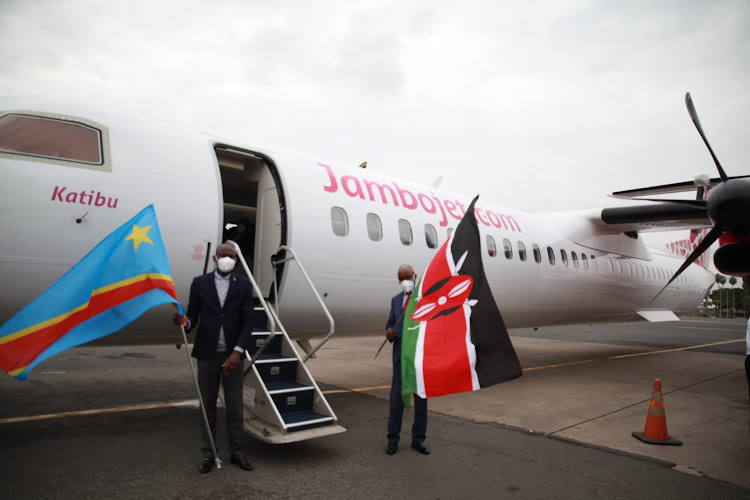 Low budget carrier Jambojet on Friday launched its maiden flight to Goma in the Eastern Democratic Republic of the Congo, as it seeks to expand to the central Africa region.

The carrier, which is a subsidiary of the national carrier Kenya Airways, is the first airline to directly connect the capital of North Kivu province and Nairobi.

This is set to increase to 4 times weekly, as demand grows.

The launch of the flight is aimed at opening up business and tourism opportunities between the two countries whose ties continue to deepen.

“We are excited about the growth prospects in the region. We have an ambitious plan to grow our network, and we are proud to be the first low-cost airline to venture into this route,” said Karanja.

Jambojet Board of Directors Chairman, Vincent Rague noted that there is opportunity for growth in the African market, and Jambojet will be at the center of this growth.

“Our ethos has always been offering affordable, convenient and reliable service to customers, and that in turn contributes to economic growth, job creation and boosts social inclusion,” said Rague.

Jambojet currently flies to six destinations including Mombasa, Diani, Eldoret, Kisumu and Malindi from its primary hub in Nairobi.

The airline also operates a direct flight from Mombasa to Kisumu and Eldoret and has plans to start operations to the Coastal Island of Lamu on September 15, 2021.