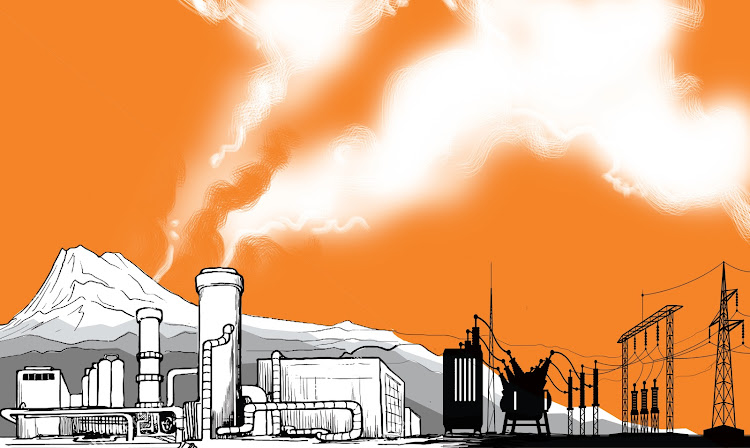 The recent severe floods in Nigeria, as well as record high temperatures in various parts of the world have placed the spotlight on the growing threat posed by climate change and the urgent need to ramp up investments in green energy solutions.

The world’s attention has also been fixated on the Ukrainian invasion, a human crisis that has thrown into stark reality Europe’s dependence on Russian hydrocarbons and the pipeline infrastructure that delivers oil and gas to the region’s consumers.

Germany, due to its own limited natural resources, is heavily reliant on Russia for more than half of its gas.

Almost half of its coal and about a third of its oil, according to Bloomberg.

While already one of the world’s most advanced economies in terms of greener energy usage, Germany has found that its renewables are nowhere near enough to sustain its population’s demands for the electricity and fuel while also powering its economy.

Like most of Europe, Germany is balancing its need for energy security and economic growth, even as it embarks on a decades-long transition to greener fuels and greater energy independence.

The need for Africa to follow a just transition to greener energy and advance the development of its people is imperative.

The developed world has a significant head-start. Compare Germany and Uganda.

Likewise, in 2018 Germany emitted 8.22 metric tonnes of CO2 per person, while Uganda’s carbon footprint was just 0.143 tonnes per person.

There are many statistics that reference this and Uganda, like most other African countries, still has a long path ahead to catch up with the developed nations of the world.

It is against these disparities that Africa needs a multi-stakeholder and multinational approach to curb the climate crisis.

Even though Africa is a minor contributor to global GHG emissions at 3.8 per cent, the climate risks for our continent are real and ominous.

African countries are not only most vulnerable to the effects of climate change, they face greater dilemmas than their European counterparts in meeting the legitimate needs of their people today.

Historically, renewables were criticised as being too expensive.

However, we have seen a significant decline in their cost due in large part to advancements in technology, making renewables more efficient and affordable.

Technological advances have increased the possibility of achieving a transition away from non-renewable energy sources, with Africa being rich in untapped renewables; solar, wind, hydropower and geothermal.

In the medium to long-term, there is an immense opportunity for Africa to produce and export green energy solutions to sunshine-poor northern climates.

There are innovative opportunities with vast potential that aim to re-tool economies to run on hydrogen produced from African sunshine and wind.

Earlier this year, Anglo American unveiled the world’s biggest green hydrogen-powered truck at a platinum mine in Limpopo, South Africa.

The mining giant intends to replace its existing diesel-fueled fleet that uses an estimated 40 million litres of carbon-based fuel a year with green-hydrogen powered trucks.

This early-stage development shows the innovative work underway on our continent and creates room for us to be world leaders in the green hydrogen economy.

President Ramaphosa called the initiative a gigantic leap for South Africa’s hydrogen future economy and represents the genesis of an entire ecosystem powered by hydrogen.

The International Labour Organisation and United Nations Framework Convention on Climate Change defines a just transition as greening the economy in a way that is as fair and inclusive as possible to everyone concerned.

This in turn, creating decent work opportunities and leaving no one behind.

While Africa must join the global drive towards limiting GHG emissions, this action must be considered within the context of Africa’s just transition towards a low-carbon economy and in a manner that recognises and addresses the deep energy deficit across African economies.

The transition away from non-renewable energy will necessarily be a gradual and measured process, given widespread energy poverty across sub-Saharan Africa, where less than 50 per cent of the population have access to electricity.

As the World Bank has argued, Africa’s recovery from the COVID-19 pandemic, and its medium-term development, both require a degree of openness to further investment in brown activities.

Many argue that a refusal to accept this would amount to denying Africa’s right to sustainable development.

A total or immediate ban on further transitional projects in Africa to help reduce environmental pressure in much richer regions is simply unjust.

Energy, in general, underpins economic growth in emerging markets, specifically in Africa, where affordable and reliable energy access is fundamental to development.

Africa’s growing urban populations will require a reliable and sustainable energy supply to power industrial production, electrify more households and expand the use of transport to drive socio-economic development.

It is important to objectively acknowledge the pressing need to balance all these realities as part of ensuring a just energy transition.

Having said that, Standard Bank Group’s long-term goal is clear. We will achieve a portfolio mix that is net zero by 2050.

That will entail reducing our financed emissions and simultaneously scaling up our financing of renewables, reforestation, climate-smart agriculture, decarbonisation and transition technologies and supporting the development of credible carbon offset programmes.

We are already a major funder of renewable energy projects in Africa.

Since 2012, 86 per cent of our new energy lending has been to renewable energy and we have not financed any new coal-fired power stations since 2009.

Here, responsible investors can not only support development, but can work with carefully selected clients to ensure that carbon-based energy projects are responsibly developed with the lowest possible carbon footprint. This is how Standard Bank intends to play our role in Africa.

We will finance initiatives that drive economic growth and human development across Africa.

Much of this will be investments in renewable energy infrastructure and transitioning to a new sustainable economy, even as we unlock opportunities from Africa’s existing natural endowment.

Every major investment must be done according to the highest ethical and governance standards.

Ultimately, just as Europe doesn’t un-develop itself by switching off gas, so too Africa cannot keep itself under-developed by forgoing all carbon-based fuel investment opportunities at the same pace as the developed global north.

This would be at great social cost for the continent. Both need to transition to something better and Standard Bank will support Africa’s just energy transition.

Climate finance is needed for mitigation, because large-scale investments are required to significantly reduce emissions.
News
3 weeks ago

"Kenya recognises devolved climate finance is a meaningful and effective driver of change."
InPictures
1 month ago
Post a comment
WATCH: The latest videos from the Star
by KENNY FIHLA
Business
13 November 2022 - 21:00
Read The E-Paper