As with previous British kings, and unlike the Queen, he wears no crown.

• BBC News was given a first glimpse of the 50p and a commemorative £5 Crown which include an image of the King by British sculptor Martin Jennings.

• The coins follow centuries of tradition with the monarch now facing left - the opposite way to his predecessor. 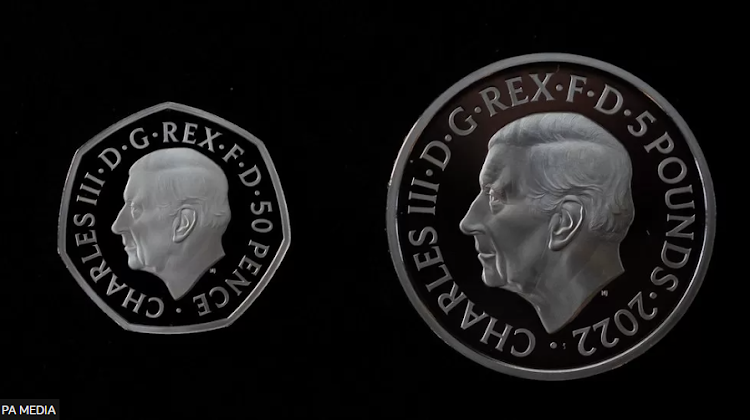 The new portrait was designed with reference to photos

New coins featuring the portrait of King Charles have been revealed, with a 50p carrying his image entering general circulation within weeks.

BBC News was given a first glimpse of the 50p and a commemorative £5 Crown which include an image of the King by British sculptor Martin Jennings.

The coins follow centuries of tradition with the monarch now facing left - the opposite way to his predecessor.

As with previous British kings, and unlike the Queen, he wears no crown.

King Charles personally approved the effigy, and was understood to be pleased with the likeness.

The coins will be sold to collectors by The Royal Mint from early next week. The 50p coin will be available for general use well before the end of the year, distributed according to demand by banks, building societies and post offices.

They will co-circulate with coins featuring the late Queen, so those 27 billion coins will still be accepted in shops.

Anne Jessopp, chief executive of The Royal Mint, said that coins generally lasted for 20 years, so both Queen Elizabeth and King Charles coins will be in circulation together for many years to come.

From the start of next year, coins from the 1p to the £2, which we use in day-to-day life, will be minted carrying the same image of King Charles. They will be sent out when needed to replace damaged and worn older coins and to cover any extra demand.

"People should not worry if they have coins with the Queen on. We will keep those coins in circulation," Mrs Jessopp said. "We are seeing people moving to different forms of payment, but people really like to use coins as well for lots of different reasons." 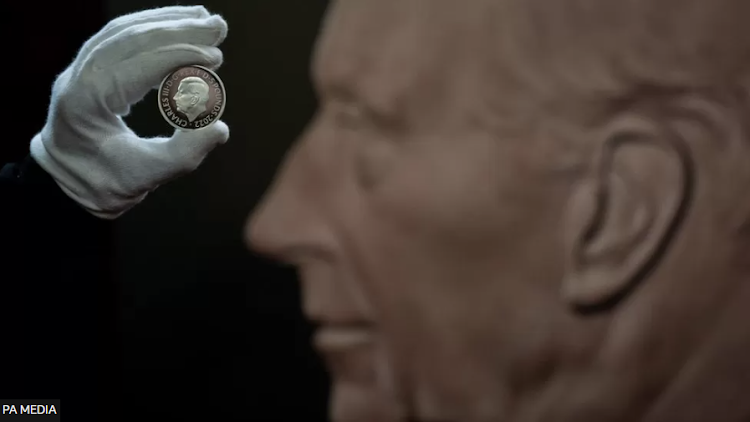 The official portrait was designed to give an accessible look to the King, and the same is true of the inscription.

Previous British monarchs have been denoted on the inscription using the Latin version of their name. However, the new coins say Charles III rather than Carolus.

The full inscription surrounding the effigy reads "CHARLES III • D • G • REX • F • D • 5 POUNDS • 2022", shortened from Latin, which translates to "King Charles III, by the Grace of God, Defender of the Faith".

The reverse of the new £5 coin shows two new portraits of the Queen, charting her journey from a young monarch to a long-standing head of state.

On the 50p coin, the reverse is a copy of the design used on the 1953 Crown struck to commemorate Queen's coronation. 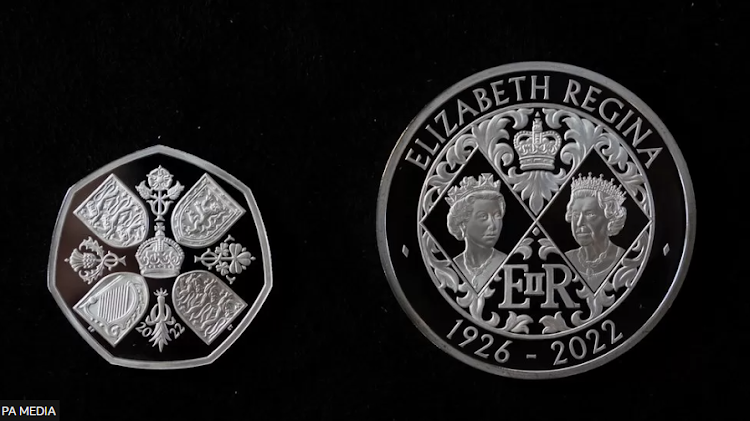 The reverse of the two coins commemorate the late-Queen

King Charles's portrait is the first coin design undertaken by Martin Jennings, but his public sculptures include poets John Betjeman, in St Pancras Station in London, and Philip Larkin in Hull.

He used photographs to come up with the design, rather than the King sitting for a specific portrait.

"It is the smallest work I have created, but it is humbling to know it will be seen and held by people around the world for centuries to come," he said.

The coins will be struck at The Royal Mint's site at Llantrisant, South Wales, where the official coin maker - and Britain's oldest company - moved to accommodate the decimalisation process in 1967.

Before decimalisation, it was common for people to carry coins featuring different monarchs in their pockets.

A memorial coin range to commemorate the life and legacy of Queen Elizabeth, including the £5 Crown, will be put on sale by The Royal Mint on Monday.

What is the Royal Mint?

Separately, people are being urged to check whether they have any paper banknotes at home, as they will be withdrawn from circulation by the weekend.

Shops are permitted to no longer accept £20 Adam Smith and £50 notes featuring the portraits of Matthew Boulton and James Watt from Saturday.

The paper £20 notes issued by Bank of Ireland, AIB Group, Danske Bank, and Ulster Bank in Northern Ireland will also be taken out of circulation.

Anyone who misses the deadline should still be able to exchange the old notes at their bank.

Post a comment
WATCH: The latest videos from the Star
by BBC NEWS None
Business
30 September 2022 - 10:30
Read The E-Paper