Fertiliser subsidy without credit not enough for farmers – experts

They say subsidies generally have proven to be ineffective in addressing real economic issues. 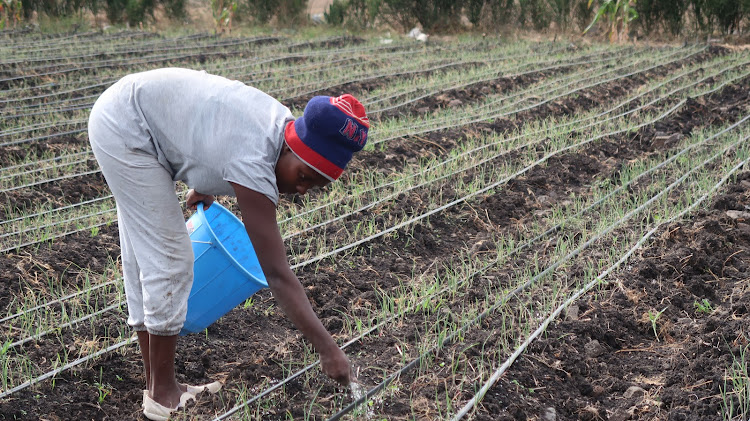 A worker applies fertiliser to an onion farm in Birika
Image: WINNIE WANJIKU

They have termed the subsidy as a basic political solution to an economic problem, saying subsidies generally have proven to be ineffective in addressing real economic issues.

“In recent past, we’ve had subsidies on fuel and maize flour. We witnessed a case where not all citizens and business operators benefit from the programme as other players were excluded," senior lecturer at Strathmore University, Lucy Muthoni, said.

In other cases, distributors were hoarding the subsidised products for their personal gain.

Fertiliser contributes about 20 per cent of the total cost of agricultural production, hence there’s need for the government to look into other factors such as credit facilitation, she said.

A lead markets analyst at trading company FXPesa, Rufas Kamau, said farmers are having a hard time accessing credits which would back them on strategies to increase production.

“It is very hard for farmers to borrow agricultural loans because of the uncertainty in production, market availability, and harvest price fluctuations. Unless it is government subsidised loans,” Kamau said.

Speaking during a twitter forum on the economic outlook, experts reiterated that subsidies are short term measures that have far reaching consequences in the future.

They urged the government, together with the exchequer, to enhance the country’s fiscal and monetary policies in order to do away with subsidies.

"Subsidised loans could lead to commercial lenders choking farmers with high interest rates which would only repel the farmers from accessing the credit," Kamau said.

According to the Central Bank of Kenya–Bank Supervision Annual Report (2021), the  agricultural sector recorded mixed performance in 2021, a year that the sector's growth contracted by 0.1 per cent.

The contraction was attributed to erratic and poorly distributed long rains, as well as inadequate short rains.

There has been calls for strategies such as affordable loans to boost the declining production.

With the sector projected to grow by 6.3 per cent this year, efforts to increase lending to this critical segment of the economy needs to be enhanced, CBK notes.

Farmers to buy cheaper fertiliser at cereals board depots

Agriculture PS says individual farmers will be entitled to maximum of 100 bags of 50kg.
News
4 days ago

The US Secretary of State held discussions with President William Ruto in New York.
News
3 days ago

Subsidies are unaffordable and distorting. The best way to reduce income inequality is to invest in free health and education for all Kenyans.
Opinion
1 week ago

State scales up subsidies to farmers to spur production

Agriculture PS says thousands of farmers in 25 counties are already benefiting from the programme.
Counties
1 month ago
Post a comment
WATCH: The latest videos from the Star
by ALFRED ONYANGO
Business
22 September 2022 - 21:00
Read The E-Paper