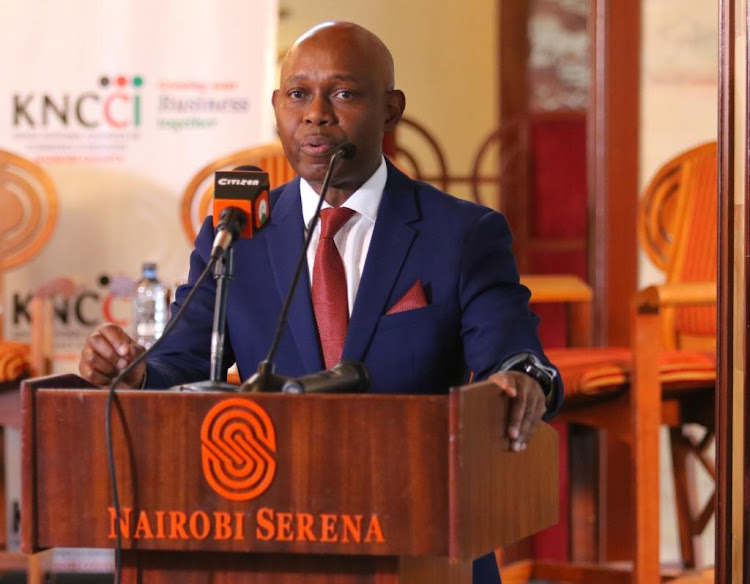 KNCCI chairman Julius Opio during a past event in Nairobi
Image: HANDOUT

Speaking at the opening ceremony of the AgroFoodpack Expo, the Kenya National Chambers of Commerce and Industry(KNCCI) Nairobi chapter termed technology and mechanization as the future of agriculture.

The three-day expo intends to provide farmers, manufacturers and peers with new ideas ranging from farm automation to indoor vertical farming as well as precision agriculture and bee vectoring technologies.

It also aims to urge stakeholders to leverage technologies such as solar-powered smart irrigation systems and digital platforms for agri-advice to ensure better decision-making in all farming practices.

KNCCI Nairobi Chapter chairman Julius Opio said there is a need to liberate the country from the rising threat of hunger occasioned by the changing climate and high cost of living backed by inflation.

“As the world over is embracing innovation and technology to curb food crisis, this event is indeed timely, and as a country, we need to accelerate our efforts to modernize farming practices,” Opio said.

Almost 3.5 million people are facing severe hunger in the country according to the UN’s Reliefweb report.

This mirrors the World Bank’s report which shows that one out of every three households in Kenya sleeps hungry due to the high cost of living.

The World Bank further indicates that the share of households unable to access staple food in the country has increased to 36 percent from November last year to March.

This indeed calls for the need to boost food production by approximately almost 60 per cent as earlier noted by FAO Kenya.

KNCCI through the expo is driving the farming modernization strategy in an effort to counter the already existing crisis.

It was also noted that the agri-food sector and related industries which have remained a key pillar of agriculture in the country, suffer from insufficient funding from lenders despite the sector contributing 33 per cent to the country’s Gross Domestic Product (GDP).

This means that small-scale farmers have to rely on unsustainable and traditional agricultural technology which translates to poor quality and quantity of outputs.

The situation is further compounded by the high costs of farm inputs and the increasingly erratic weather patterns that the country has been experiencing in recent years.

KNCCI, therefore, calls for modeling of both private and public sector investment and proper financing of value chains in the sector to promote increased agricultural production.

According to the Kenya National Chambers of Commerce and Industry, the last three years have been a roller coaster for businesses
Counties
1 month ago

The initiative will also aim at tapping the technological prowess in the Agricultural sector.
Business
1 month ago

The partnership will see the two institutions synergize to support the development of financial solutions.
Business
3 months ago
Post a comment
WATCH: The latest videos from the Star
by ALFRED ONYANGO
Business
02 September 2022 - 18:00
Read The E-Paper