•An overall reduction of revenue did not affect the firm's net earnings as profit after tax increased marginally to Sh39 million compared to Sh38.2 million the same period in 2021.

•During the first six months of 2022, hospitalisation arising from the virus infection decreased hence cutting the gas company income . 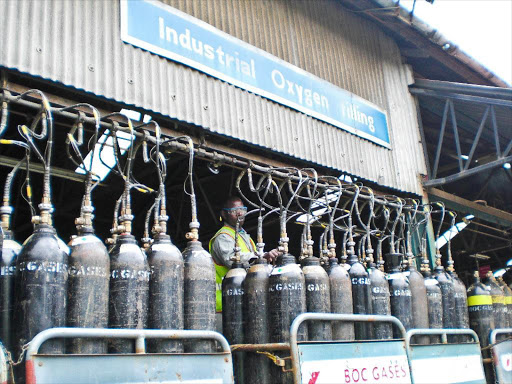 Decline in Covid-19-related demand for medical oxygen affected BOC Kenya's half year revenue, which declined 28 per cent to Sh504.2 million.

This is from Sh696.2 million same period last year.

During the first six months of 2022, hospitalisation arising from the virus infection decreased hence cutting the gas company income .

With the demand for medical oxygen almost back to pre-covid period, the company's production facilities were once again able to fully meet demand for oxygen used in industrial application as well as nitrogen.

Therefore, revenue from industrial gases increased due to recovery in demand as local economics conditions improved.

An overall reduction of revenue did not affect the firm's net earnings, as profit after tax increased marginally to Sh39 million compared to Sh38.2 million the same period in 2021.

The increase in net earnings, was mainly due to the firm cutting back on costly oxygen imports needed to supplement local production.

"The company is happy to note that the overall cost of power has decreased in 2022 and is hopeful that the lower prices will continue to hold," Ruth Ngobi, BOC secretary said in a statement.

However, she noted that other product prices have been impacted, most notably the cost of calcium carbide, which is used  to manufacture acetylene gas.

Rising fuel prices and the depreciating Kenyan shilling against major international currencies are also reasons for concern for the manufacture.

Cash and cash equivalents remained high at Sh463 million during the period under review.

Cash generated from operations during the period dipped 43.4 per cent to Sh55,498 from Sh98,117 due to a greater demand on working capital.

The company is currently implementing tenders for the supply of medical oxygen tanks and construction of medical gases pipelines, whose cash collections are expected to be in the second half of the year.

Net cash from operating activities increased to Sh96.1 million from Sh78.9 million in 2021.

Though the rising costs continue to remain a concern, the company is cautiously optimistic that the financial results of the first half of the year will be maintained in the second half.

The board of directors has declared an interim dividend of Sh1.60 per share for the first six months period ended July 30, to be paid out on October 22 to shareholders.

In 2021, BOC board and management said it had developed a strategy to defend its market position and break into new segments through focused internal alignment.

The move was after the listed company's net profit  for the year ended December 31 almost doubled to Sh101.7 million, from the Sh55.9 million reported the previous year, as the firm cashed in on sale of medical gas.

Main focus was put on ensuring sustainable improved financial  performance of the company in the coming years.

According to management, this would be achieved through protecting the company's base business, creating new business streams, turning around its customer service operations and  strengthening execution using its workforce, pointers of a possible continued operations as a company.

This is in the wake of the Covid-19 pandemic.
Business
1 year ago

The firm produces oxygen by the chemical method, using a naturally occurring salt to separate nitrogen from the air.
News
1 year ago
Post a comment
WATCH: The latest videos from the Star
by SHARON MAOMBO Business Writer
Business
29 August 2022 - 04:00
Read The E-Paper