China aims to push the trade from medium to long term over the next decade. 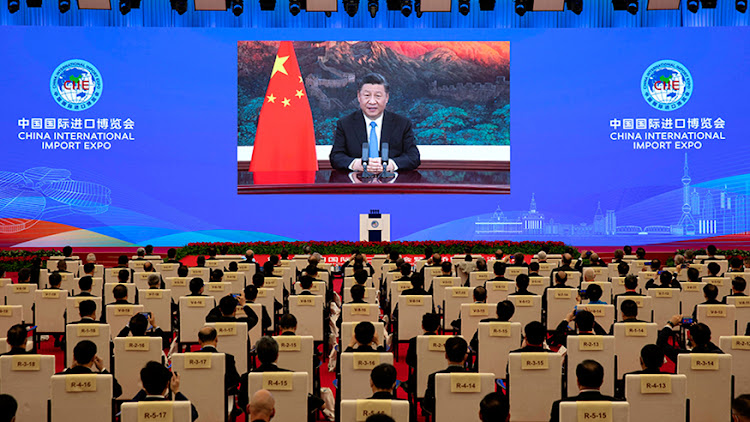 President Xi Jinping delivers his speech at the opening of the third edition of the China International Import Expo (CIIE) on November 4.
Image: Courtesy/ ciie.org

The Africa-China relationship is moving into a new phase with the latest policy initiatives, development strategies and financial pledges as tools for enhancing deeper and broader engagement by 2035.

The latest report by Economist Intelligence shows China aims to push the trade from medium to long term over the next decade trying to outdo major international powers such as the US and EU.

To consolidate its position as the largest single country trader with the continent, it has previously pledged to buy a total of $300 billion(Sh35.9 trillion) worth of products from Africa between 2022 and 2024.

This was during the eighth Forum on China-Africa Cooperation(FOCAC) meeting.

The purchase would maintain the record level of African exports to China that was achieved in 2021.

China will further aim to become self-reliant in terms of essential inputs to production, especially high-end technology and will attempt to minimise logistics bottlenecks.

It will be achieved through building more secure supply chains for essential materials from closely aligned trade partners.

Building overseas markets as an outlet for its export industries and as a business opportunity for its foreign investment community is also a strategy China intends to implement.

China has maintained its one-year Loan Prime Rate(LPR) at 3.70 per cent and the five-year LPR at 4.45 per cent.

Although, there’s an expected slowdown in Chinese demand in 2022 to 2026 period, especially in construction.

The sector is dependent on the intensive use of natural resources which will make this difficult to achieve.

This is because the amount of materials used in production and consumption continues to rise globally as the rate at which materials are being extracted is outpacing both population and economic growth.

Therefore, if the usual, use of more materials with less efficiency continues, global resource extraction will increase 110 per cent by 2060 as noted in the One Planet report.

The EU and the US in their active implementation of foreign policy that seeks to reshape their own economic and political relations with Africa is also another factor that will slow down China’s efforts in the next four years.

It will to an extent help to counter, but not dislodge Chinese influence across the continent. The report reads in part.

China’s trade with Africa in the past year has seen the exports from African countries increase by almost 50 per cent whereas the imports from China increased by almost 17 per cent.

This is attributed to the 35 per cent rise in the value of trade between Africa and China from 2020 to $254 billion(Sh30.4 trillion) last year.

The top exporters were South Africa, Angola and the Democratic Republic of Congo(DRC) with 31, 20 and 11 per cent of total African exports respectively.

Kenya was ranked fifth among the top importers from the Chinese market with five per cent of total African imports from China.

Nigeria was the top importer with 16 per cent followed by South Africa with 14 per cent then Egypt at the third with 12per cent.

Kenya’s trade deficit with China has continued to widen despite Nairobi making the world’s most populous nation a priority in its new export strategy in July 2018.

According to the latest trade data by the Kenya National Bureau of Statistics (KNBS), the value gap between exports and imports widened to Sh425.17 billion in the year through March 2022 from Sh370.58 billion a year ago.

As Kenya continues to strive to reduce the trade deficit with China, the report notes that African countries should look at other broad drivers that are likely to push more Chinese trade and investment toward Africa in the decade ahead.

These include intense international competition for Africa’s extractive sector and agricultural resources.

The report says that Chinese official investment, largely through loans and grants that are channeled through state-owned enterprises and state-backed financial institutions will continue targeting Africa’s natural resources as well as trade-facilitating transport and power infrastructure.

“These are strategically important areas, given China’s current and future demand for resources and could result in further investment to scale up African supply chains of raw and processed energy, minerals, metals and agricultural products,” EIU says.

The African continent is also asked to leverage the opportunity that comes from the Chinese market of food security issues and enormous food import requirements.

This could drive large trade and investment flows in African agricultural products and production as well as environmental management systems and climate change mitigation strategies.

With Africa’s pool of labour, the continent could present a potential outlet for China’s labour manufacturing sector.

Africa has potentially fast-growing markets for a wide range of consumer goods and services and the influence of these factors will be shaped by China’s refocus on its model of development which seeks to build domestic production capabilities and consumption.

In 2020, nearly one-third of infrastructure projects worth at least Sh 5.9 billion were built by Chinese companies.
Business
2 months ago

China and Chinese companies have to increase funding for projects, especially in rural areas.
News
2 months ago

China-Africa trade has ballooned 24-fold over the past two decades
Business
3 months ago
Post a comment
WATCH: The latest videos from the Star
by ALFRED ONYANGO
Business
15 August 2022 - 10:56
Read The E-Paper