How Singapore is turning multi-storey car parks into farms

At least a dozen of rooftop farms have now sprouted up across the South East Asian city state.

•The government started leasing out the unusual plots in 2020 as part of its plans to increase local food production.

•At least a dozen of rooftop farms have now sprouted up across the South East Asian city state. 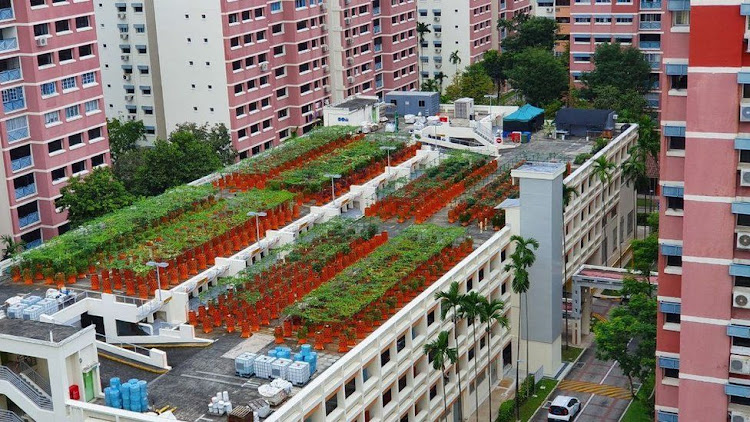 The farms are located in public housing estates.
Image: courtesy

Eyleen Goh runs a farm from the top deck of a car park in Singapore.

And this is not a small operation - it supplies nearby retailers with up to 400kg of vegetables a day, she says.

"Singapore is quite small but we have many car parks. It is pretty much the dream to have farms [here] to meet the needs of residents in the community," she says.

At least a dozen of these rooftop farms have now sprouted up across the South East Asian city state.

The government started leasing out the unusual plots in 2020 as part of its plans to increase local food production. The country of 5.5 million people currently imports more than 90 per cent of its food.

But space in this densely populated island nation is scarce and that means land is not cheap. Singapore has some of the world's most expensive property.

One farmer told the BBC that the high cost of his first car park plot meant that he had to give it up and move to a cheaper location.

When BBC News visited Ms Goh's farm, which is about the third of the size of a football field, operations were in full swing.

At the other end of the facility meanwhile, another employee was busy re-potting seedlings.

"We are harvesting every day. Depending on the vegetables we are growing, it can range from 100kg to 200kg to 400kg per day," Ms Goh says.

Although she has received some subsidies, Ms Goh says her business is not profitable yet.

She has 10 employees and pays a rent of around S$90,000 a year for the space and another car park site, which is still being set up.

"Our setting up period happened during the Covid pandemic, so logistics were way more expensive and took a longer time," Ms Goh explains.

"Moreover, this was the first rooftop car park tender awarded [by the government] so the process was very new to everyone," she adds.

Nicholas Goh, who is not related to Ms Goh, says he has managed to turn a profit by charging people a monthly fee to harvest vegetables at his urban farm.

He says the idea is particularly popular with families who live nearby as "it is a community kind of approach, rather than a commercial approach".

However, another urban farmer, Mark Lee, says high costs have driven him to move to an industrial building that charges a "negligible" i.e. lower rent.

"Vegetables are ultimately just vegetables. You can get it at the freshest and best quality but there is limitation to how much one would pay. We're not talking about truffles here," Mr Lee says.

Rooftop farms are not the only way Singapore aims to increase the amount of food it grows.

Most of the country's home-grown produce comes from high-tech facilities that are heavily subsidised by the government. It had 238 licensed farms in 2020, according to official figures.

Some of the farms are already profitable, and can expand their production to increase profits, the Singapore Food Agency (SFA) says.

"Food security is an existential issue for Singapore. As a globally connected small city-state with limited resources, Singapore is vulnerable to external shocks and supply disruptions," an SFA spokesperson tells BBC News.

"This is why it is important that we continuously take steps to secure our essential resources," the spokesperson adds.

Earlier this year, the issue of food security came into sharp focus in Singapore when several countries in the region banned or limited exports of key foods.

Governments reliant on imports tried to protect their food supplies as the Ukraine war and the pandemic pushed up the cost of everything from staple foods to crude oil.

By 2030, Singapore aims to produce 30% of the food it consumes itself - more than three times the current amount.

"There are measures in place such as productivity grants from SFA, and regular farmers' markets to encourage consumers to buy more local produce," says Prof Chen, who is a director of the university's food science and technology programme.

"Perhaps helping local farmers to adopt simple technologies... may be considered," he says.

However, Sonia Akter, an assistant professor at the Lee Kuan Yew School of Public Policy, believes high operating costs are likely to remain a major challenge for urban farmers.

"Singapore is offering a lot of subsidies and financial support to entrepreneurs who are working in this space," she says.

"The question is whether these farms will be able to operate and be commercially viable when the government support stops flowing."

Back on a rooftop surrounded by tower blocks in the midst of Singapore's urban sprawl, Ms Goh may seem a world away from traditional agriculture.

However, she echoes the sentiments of generations of farmers who have come before her: "Giving up is not an option. The more challenging it is, the more rewarding it will be.

One fish cage can hold 1,000 fish and produce over 2,000kg within six months.
Counties
2 weeks ago

Group saves mangroves along a creek, this leads to a crab restaurant
News
2 weeks ago
by BBC NEWS None
Business
31 July 2022 - 21:00