KEBS Standard KS 1758 meant to ensure only fresh produce that ends up at retail shelves.

•KS1758 was developed by agricultural private sector stakeholders, Ministry of agriculture, Livestock and Fisheries, and Kenya Bureau of Standards.

•KEBS Standard KS 1758 meant to ensure only fresh produce that ends up at retail shelves. 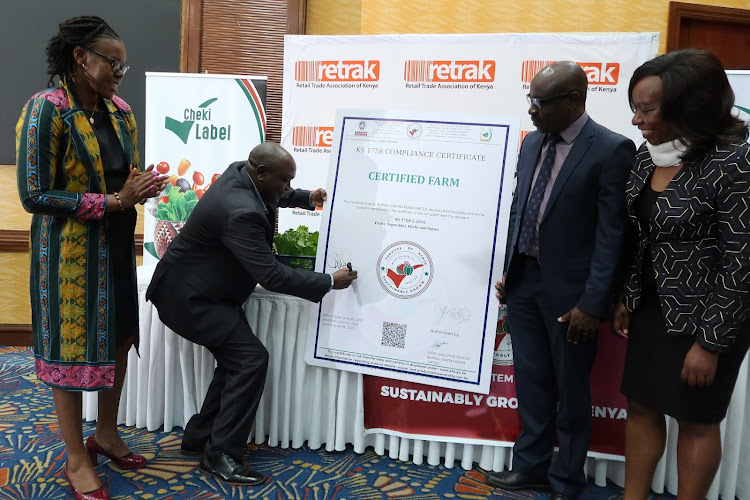 Kenya has joined the rest of the world in standardizing the entire farm produce value chain to enhance food quality.

On Friday, the Agricultural and Food Authority and the Retail Trade Association of Kenya led in the launch of KEBS Standard KS 1758.

The standard outlines processes, inputs and considerations that will go into ensuring that fresh produce that ends up at retail shelves, in the Domestic market are safe.

KS1758 was developed by agricultural private sector stakeholders, Ministry of agriculture, Livestock and Fisheries, and Kenya Bureau of Standards.

It is designed to help farmers adopt best agricultural practices to meet  market demands, including ensuring that produce arrives in markets with the same safety and quality and to reward them with decent income for their work. It also takes care of the workers welfare and sustainability of the environment

Speaking during the launch, Retrak chief executive officer Wambui Mbarire said that the country is now well on its way to building a more resilient and sustainable food production ecosystem that is expected to enhance both food safety and food security.

The audit was conducted by Bureau Veritas, the independent agency contracted for the assignment.

With food playing a central role in public health outcomes and wellness becoming a major lifestyle phenomenon, Mbarire explained that Kenyans have in recent years raised their health-consciousness and it is incumbent upon food producers to meet their modern tastes and food quality demands.

“KS1758 begins to fill a major gap in our country’s that exposed our citizenry to an unaudited supply of food, in terms of quality and safety”,” Mbarire stated.

She added that this will involve a major shift from small individual farming to more collective farmer groups, giving rise to centralized access to production inputs, enforcing labor and environmental practices, stabilizing farm gate prices and building consistent markets for the farm produce.

It will also involve establishing structured handling, storage and transportation mechanics.Ultimately, it seeks to assist in instituting food traceability, a mechanism for follow up in case consumers are not satisfied with a particular produce.

“The issue of consumer awareness is high on our agenda as the retail industry and it is paramount that the food value chain participants measure up to the national drive to achieve a modicum of food safety standardization,” she said.

Mbarire pointed out that in developing the new food safety code, Kenya was giving attention to almost 90 per cent of Agricultural produce that is consumed locally, comparable to that given to the 10 per cent or so that is exported.

This, she said, is particularly important for the retailers in the country as they bear the largest responsibility of serving fresh farm produce to consumers on their shelves and delicatessens.

Gideon Aliero, the Chairman of the National Standards Implementation Committee said that KS1758 matches the international standards such as GlobalGAP.

“For many years, our food safety standards were pegged on international ones due to the high degree of focus on the export markets, despite the fact that less than 10 per cent of Kenya’s total fresh produce is exported,” he noted.

“The Mark of Quality shows that the food on that shelf has passed the KS1758 integrity test. In a short while, consumers will identify products that meet requisite health, environmental and sustainability qualifications,” said Mbarire.

The adoption of bamboo will ease pressure on wood and metal, whose prices have skyrocketed.
Business
7 months ago