•During the same period, prices of sugar decreased by 1.12 per cent. 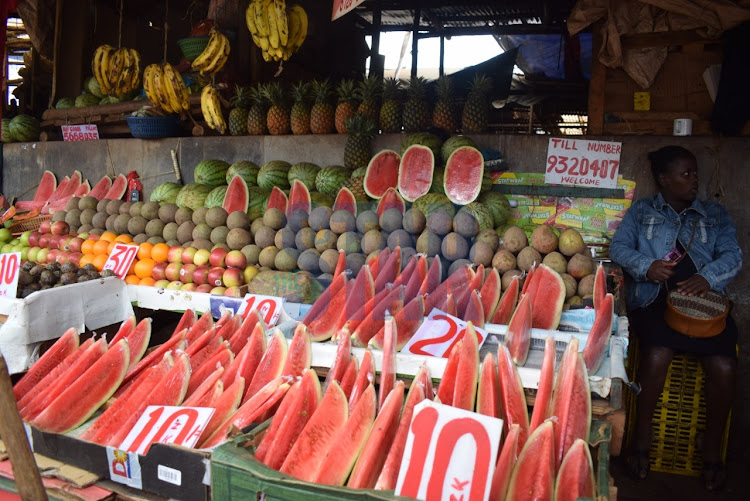 Groceries on display for sale at Kangemi market on April 7, 2022.
Image: CHARLENE MALWA

High cost of commodities pushed Kenya's April inflation to an extraordinary 6.47 per cent, according to latest official data.

Inflation, as measured by the Consumer Price Index (CPI) was recorded at a lower rate of 5.56 per cent in the previous month.

During the same period, prices of sugar decreased by 1.12 per cent.

Kenya National Bureau of Statistics (KNBS) data shows the rise was mainly due to an increase in the price of food and non-alcoholic beverages which went up by 12.15 per cent.

Prices of furnishings, household equipment and routine household maintenance increased by 7.15 per cent.

The Consumer Price Index (CPI), a measurement of the percentage change in the price of a basket of goods and services consumed by households, increased by 1.69 per cent from an index of 120.139 in March  to 122.173 in April.

The month-to-month food and non-alcoholic beverages index increased by 3.03 per cent between March and April .

This is attributed to increase in prices of most of the food items. As a consequence, the index of services for restaurants and accommodation increased by 1.03 per cent over the same period.

This is on increased operating costs, elections jitters
Business
9 months ago
Title: "WATCH: The biggest news in African Business"
Post a comment
WATCH: The latest videos from the Star
by SHARON MAOMBO Business Writer
Business
28 April 2022 - 17:17
Read The E-Paper