Major focus on the horticultural sector.

•Macharia said the port of Mombasa has since 2017 increased its capacity by an additional 550,000 TEUs within the recently completed deep water berths 20 and 21 which enables berthing of large vessels and provides interfaces for land based transport through seamless movement of cargo from the point of origin to the destination.

•He said the Mombasa Port Development Project phase 2 which will be completed by August 2022 will further increase the capacity by additional 500,000 TEUs 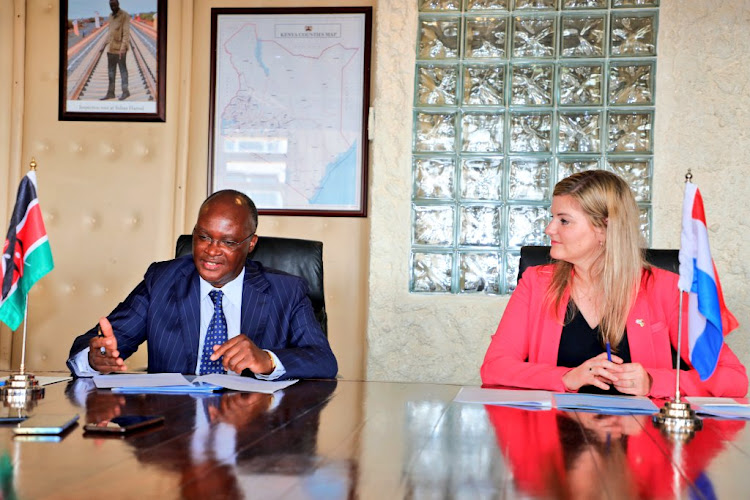 Transport CS James Macharia with his Netherlands counterpart Ms. Liesje Schreinemacher Minister of Foreign Trade and Development Corporation during the signing of Letter of Intent to develop Cool Logistics Corridor to boost the horticulture industry in Kenya. Image: Elizabeth Muthoni.

The refrigerated shipping industry and the cold chain are evolving every day and Kenya is not being left behind.

The country recently signed a letter of intent with the Netherlands to develop a Cool Logistics Corridor that will support Kenya’s horticultural sector.

According to transport CS James Macharia, the deal is part of the government’s efforts to boost trade, and improve the lives of Kenyan horticultural farmers.

The development of the Cool Logistics Corridor will involve building consolidation centers for fresh produce to be transported by sea through Mombasa to international markets.

It will also see the improvement of existing transport systems for timely transportation and storage of exports, Macharia said.

CS Macharia has since noted that the partnership will help reinforce Kenya’s East Africa hub position for handling perishable products.

“The initiative is a great opportunity for the two countries to cement the trade relations,” Macharia said.

The Netherlands remains a leading export market for Kenyan flowers which boosted the value of exports in January this year, after a slow-down during the pandemic period, mainly 2020.

According to the latest leading economic indicators by the Kenya National Bureau of Statistics (KNBS), the value of exports to the European country increased to Sh5.3 billion, up from Sh4.04 billion.

Earnings from exports of cut flowers, fruits, and vegetables rose 5per cent in 2021 from the previous year, with horticulture earnings increasing to Sh 158.1 billion, up from Sh 150.2 billion a year earlier.

Horticulture remains a major source of foreign exchange for Kenya alongside tea, tourism and remittances.

According to CS Macharia,the realization of a functional cool logistics will be made possible due to strides made in rehabilitating, upgrading, and developing infrastructure along the Northern Corridor and at the Port of Mombasa in the last 10 years.

“The key vital transport systems namely the Standard Gauge Railway and the Port of Mombasa including the Inland Container Terminal Depots in Embakasi and Maai Mahiu have the capacity to support this initiative of developing a cool logistic corridor for sea freighting of fresh produce to Europe,” Macharia said.

The Port of Mombasa has increased its handling capacity by an additional 550,000 TEUs since the completion of the first phase of the second container terminal.

Phase two of the project expected to be completed by August this year will bring in an additional 500,000 TEUs, Macharia noted.

Macharia said the completed expansion work at ICD Nairobi and the construction of the new ICD at Maai Mahiu have a guaranteed capacity of 405,000 TEUs and 72,000 TEUs respectively.

This, he said, is adequate to handle fresh produce from the consolidated centers around them and beyond.

Macharia said the port of Mombasa and Embakasi ICD have adequate reefer points for supporting refrigeration of the fresh produce, and the installation of reefer points at Maai Mahiu ICD will be undertaken in due course.

The country is also counting on the SGR network from Mombasa to Naivasha/ Suswa to transport fresh produce to the port.

This is from consolidation centers around Nairobi, Maai Mahiu and Suswa areas.

Netherland Minister for International Trade and Development Corporation, Liesje Schreinemacher, has since affirmed Netherland's commitment to the continued strengthening of the bilateral relationship between the two countries.

“ We have really gone and taken the step from development corporation to the economic partnership which I think is mutually beneficial for both our countries. This is one of the reasons why I wanted to visit Kenya as one of the first countries in this region,”Schreinemacher.

She said the letter of intent is an important step in the transition towards sea freight for perishables.

The Kenya Private Sector Alliance agriculture has welcomed the move which it believes will help address challenges in the sub-sector.

“One concern has been the extent to which fresh produce can be airlifted. We welcome the new move to have in place Cool Logistics Corridor that will support Kenya’s horticultural sector,”said Jane Ngige, vice chair, agriculture sub-sector at Kepsa.

She said Netherland provides a conduit for goods from Kenya to other parts of the world.

The Cool Logistics Corridor is coming at a time when the global supply chain is constrained by the Russia-Ukraine war, which has affected the recovery from the Covid-19 pandemic.

Meanwhile, Kenya is also banking on the connection between the SGR and the Metre Gauge Railway to boost trade with her regional peers, mainly Uganda which takes up to 83 per cent of transit cargo through the Port of Mombasa.

According to CS Macharia, the newly completed meter-gauge railway link between Maai Mahiu and Longonot has provided seamless rail transport up to the Kenyan-Uganda border of Malaba.

Commercial counselors are being engaged to make the letter of intent into reality, all the way from produce to Mombasa and global markets.