•Mathuki further called upon the private sector to promptly harmonise their positions on trade agreements at the national level before engaging their counterparts in other Partner States to fast track trade deliberations.

•The SG attributed the significant increase in trade to bilateral meetings by the Heads of State of Tanzania and Kenya in May 2021. 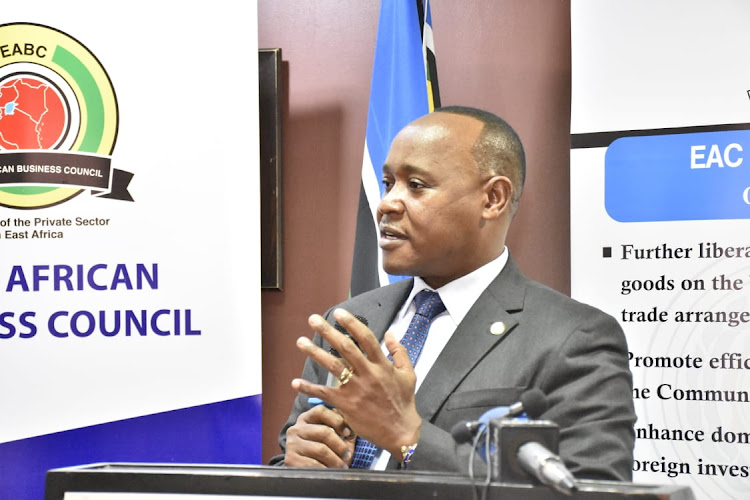 Mathuki further traders to promptly harmonize their positions on trade agreements at the national level before engaging their counterparts in other partner states to fast-track trade deliberations.

“Regular consultations and dialogues within the national private sector bodies are critical in building consensus within a partner state,'' Mathuki said.

He added that divergent positions within a country will only delay in concluding trade deliberations at the regional level, affecting the implementation of regional trade policies.

Speaking during a CEOs engagement roundtable with business leaders in Arusha, Mathuki asked the business community to push for Public-Private Partnerships.

He attributed the increased trade flows between Kenya and Tanzania to public and private bilateral dialogues in recent months.

According to data from the Kenya Revenue Authority (KRA) published by the Central Bank of Kenya, Kenya’s imports from Tanzania grew by 70 percent from January to June, compared to the same period last year.

The statistics indicate that the value of goods ordered by Kenya from Tanzania stood at $167.5 million in the stated period.

The same data shows that Kenya’s export to Tanzania dipped by 21.39 per cent ($158 million), resulting in a rare deficit of $9.3 million.

Mathuki urged the private sector to drive the trade and investment agenda by establishing partnerships with their Governments to fast track infrastructure development.

“Private sector needs to move beyond advocacy and liaise with the Government in providing solutions to some of the trade issues being faced across the EAC Partner States,” he said.

The Secretary-General also highlighted the urgent need for the private sector to improve the competitiveness of their firms, by embracing ICT, promoting digital trade, to compete with other regions that are fully automated.

To promote a favorable business environment, the SG also called upon the Tanzania private sector to take a lead role in engaging the government to roll out vaccination programs in the country.

“A region that is vaccinated will provide an attractive ground for tourism and also attract and retain investors. The Tanzanian private sector needs to also implore citizens to be open to vaccination, as a strategy for economic recovery,” he said.

On improving cross-border trade, Mathuki said that the EAC Secretariat was working on deploying a 24-hour working system at the border, among all Partner States and fully integrating the One-Stop Border Post systems.

The Secretary-General reaffirmed his commitment to pushing for the finalization of the comprehensive review of EAC Common External Tariff, harmonization of domestic taxes in EAC and elimination of Non-Tariff Barriers in the region.