Uchumi upbeat of comeback as it re-stocks branches

It has replenished its Lang'ata Hyper.

•Currently, the retailer has four stores in operations.

•It has embarked on a charm offensive to lure suppliers and small traders to help stage the come back mainly in restocking its stores. 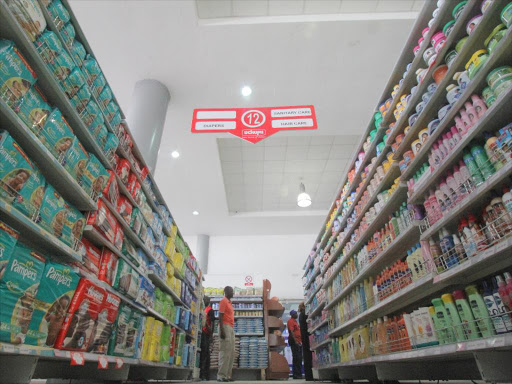 Struggling retailer Uchumi Supermarkets hopes to make a comeback after close to five years of dwindling fortunes, that has seen it close up to 33 branches.

The former retail giant has embarked on a charm offensive to win back suppliers and small traders to help stage the come back mainly in restocking its stores.

While it has lost most of its formerly occupied spaces in malls and key installations, the retailer which had a network of about 40 stores in Kenya, Uganda and Tanzania has restocked its few operational outlets hoping  to regain footing and expand.

It currently has four stores in operations, CEO Mohamed Ahmed told the   the Star, all in Nairobi.

At the Lang'ata Hyper, vendors are allowed to sell their wares during the weekends by renting out spaces, a new concept the retailer has come up with.

It expects to derive income from renting out the spaces whose charges range from Sh2,500 for smaller spaces to Sh10,000 for premium spots.

It has also replenished the store making it one of its well stocked outlets.

“Lang’ata has been reopened and is fairly well stocked. We continue to work with suppliers and distributors to improve our offerings,” Mohamed told the Star in an email reply.

While he admitting suppliers have been reluctant to trade with retailers in recent times, especially with the collapse of Nakumatt and the financial troubles hounding Tuskys, he said Uchumi has streamlined operations to ensure prompt payment.

“This is giving confidence in Uchumi amongst our suppliers,” he said, “Our focus is to stabilise the business by working with our various partners.”

The Nairobi Securities Exchange-listed retailer has been struggling with capital since 2019, with efforts to sale off some of its assets to raise working capital  proving difficult.

These include a 20-acre prime parcel of land located near the Thika Road Mall where it is locked in an ownership dispute with the Kenya Defence Forces (KDF) which has laid claim to the parcel, and has moved its equipment on site.

Uchumi had already signed a sale agreement with a church group, which had committed to buy the land for Sh2.8 billion.

Mohamed yesterday said the matter is being “discussed at higher levels.”

As of 2019, it owed creditors and suppliers more than Sh3.6 billion which it has been keen to clear and win back suppliers for its recovery plans.

“We have had a number of initiatives to turn round the company. The government has supported and continue to support us,” Said Mohamed.

The retailer this week received a reprieve after High Court blocked the auction of  its assets over a Sh34 million rent arrears.

It had sought the services of financial advisory firm - InVhestia Africa Ltd in 2019, to help resolves its financial woes, which saw the development of a Company Voluntary Arrangement to help restructure its debt and business optimisation.

According to the draft plan, the retailer projected to make a net profit of Sh61.5 million as at June 30,2020, bouncing back from a net loss (provisional) of Sh515.9 million in the year ending June 2019.

The Covid-19 pandemic has hard-hit the retail sector forcing major retailers to cut operations in recent times, including Tuskys which as of December last year, had closed 14 branches from a total of 64.

Uchumi is down to four branches from 37 while South African retail giant Shoprite which is exiting the Kenyan market has two branches down from four.