exercise meant to cut on cost

•Pilots have pleaded with President Uhuru Kenyatta to save their jobs.

•Chairman Michael Joseph however says no pilot has been sent home so far. 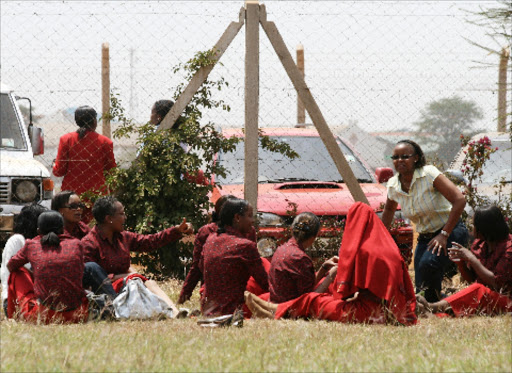 TROUBLED: Kenya Airways employees converge at JKIA during a past strike/Jack Owuor

Kenya Airways will complete its staff shake-up by end of September, it has said, as it moves to reorganise its operational structures which management says will help it remain afloat.

This is in the wake of the Covid-19 effects and disruption on global travel that has sank airlines into losses, amid job cuts in the industry.

The airline which has about 4,300 employees is said to target at least 1,500 workers in the exercise, aimed at cutting costs.

On Tuesday, the airline served 400 workers with redundancy letters in the second phase of the layoffs,majority being cabin crew and technical team.

Most staff were qualified for flight resumption
Business
1 year ago

It had earlier this month served 22 pilots with redundancy letters.

“We will finish by the end of September as long as we don't have another pandemic,” chairman Michael Joseph told the Star in an interview, without giving the exact number that will be affected.

“I don't know what the eventual number will be but it is a tough thing to do. Nobody wants to be laid off and nobody wants to do lay-offs. It is really tough to let people go,” he added.

The termination of contracts, according to chief human resources officer Evelyne Munyoki , is a result of the effects of Covid-19, which have adversely affected the airline forcing it to significantly suspend and reduce its operations.

“In the circumstances, I regret to advise you of management decision to terminate your appointment by giving you one month notice with effect from July 31, 2020,” Munyoki says in the letters seen by the Star.

KQ, as it is know by its international code, resumed domestic flights on July 15. International flights resume tomorrow.

KQ resumes operations with two flights headed to Mombasa and Kisumu from JKIA,
News
1 year ago

Its pilots, through their lobby-Kenya Airline Pilots Association (KALPA) has bitterly protested the lay-offs, pleading with President Uhuru Kenyatta to save their jobs as the carrier goes into nationalization.

According to KALPA, reducing the airline’s size could see it lose its market share to competitors both from the region and international.

“The decision to downsize Kenya Airways operations will severely impact the larger economy, risking Kenya's strategic relevance as a regional hub for both passenger traffic and cargo,” Kalpa General Secretary Murithi Nyagah says in an open letter to the President.

He says KALPA acknowledges the government’s move to nationalise the airline as a demonstration of commitment to safeguarding its value, not only as a foreign exchange earner, but also its absolute significance to the horticulture, floriculture and tourism sectors.

Joseph(KQ chairman) however said no pilots has been sent home so far and that the airline has only put on hold renewal of short-term contracts.

“No pilot has been sent home except maybe staff who were on probation,” he said.

He said the airline is ready to resume international flights with its pilots.

“We have been doing a lot of evacuation and freight flights, so most of the Boeing 787 Dreamliner and Boeing 737 pilots are flying freight or evacuation flights so we are good to go,” Joseph said.

It will however be forced reduce the number of aircrafts in operation, from 38  to 24 , due to low traffic.