But outbreak in Italy is expected to reduced Malindi tourism 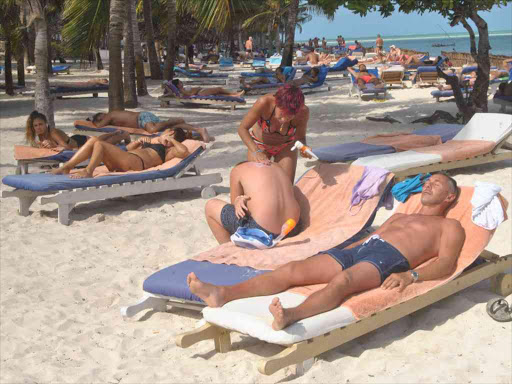 Tourists on Holiday at Jacaranda beach resort in Watamu Kilifi County on August 17.

A latest report by the Institute of Chartered Accountants in England and Wales’ (ICAEW) shows the country’s economic outlook is moderately positive and the medium-term tourism prospects remain muscular despite the coronavirus outbreak. None of the suspected cases in Kenya tested positive.

The number of tourist arrivals in Kenya increased to 132,019 in December from 121,070 in November last year.

The East Africa region has maintained its status as the continent’s growth hots-pot in the first quarter of 2020. Output has slightly decelerated to six per cent, being kept stable by the fact that the region boasts some of the fastest-growing economies globally, the report stated.

With the outbreak in Italy, many Italians are choosing not to visit Malindi, for example.

Last week, France which is the world-leading tourism destination, indicated that sector profits had declined by 30 to 40 per cent, attributed in large part to the coronavirus.

The virus has global tourism firmly in its grip with a major impact being felt across the Asian continent, where leisure and business travel contributed $884 billion to GDP, the latest data compiled by the World Travel and Tourism Council shows.

The global airline industry is also facing huge financial losses and its first traffic decline in more than a decade.

Globally there have been more than 94,000 cases and 3,220 deaths according to a Reuters tally.