•The two firms announced a partnership that will allow Octagon to service existing and acquire new pensioners on behalf of the South Africa based firm, with revenue shared between the two firms

•Alexander Forbes Group Holdings reviewed its strategic business and operating model last March, a move that saw the retirement services provider shed off its Uganda and Zambia operations to Octagon 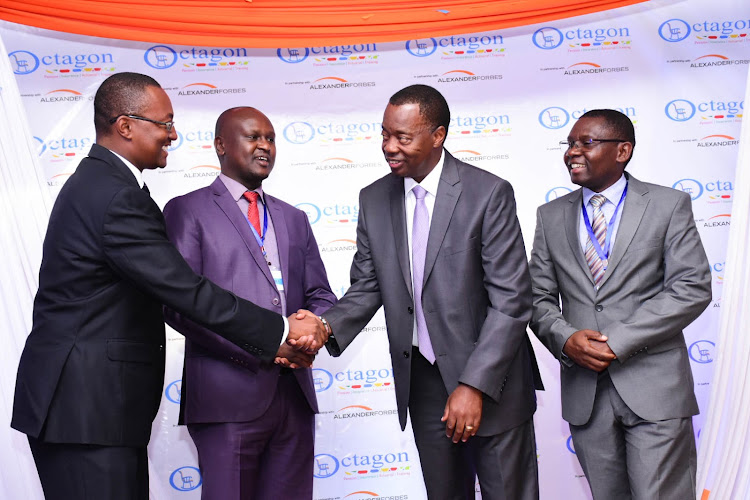 Octagon Africa is looking to fast track pension coverage in the East African market through partnerships with global industry players.

Alexander Forbes Group of South Africa, which is listed on the Johannesburg Stock Exchange (JSE), has had its eye on the local firm, having already sold off a 49 per cent shareholding in its Zambian subsidiary to Octagon.

Yesterday, the two firms announced a partnership that will allow Octagon to service existing and acquire new pensioners on behalf of the South Africa based firm, with revenue shared between the two firms.

He described Octagon Africa as “the best fit for our business” and projected a seamless transition.

In 2017, the firm cut its shareholding in its East African subsidiary to comply with an amendment to the Retirement Benefits Act that restricts foreign ownership in a pension fund administrator to a maximum of 40 per cent.

This resulted in a change in the brand from Alexander Forbes to Zamara.

“We are looking to use Octagon Africa to have a greater footprint in East Africa. We are very happy to have our presence back in Kenya,” Mokoena said.

Speaking during the announcement Octagon CEO Fred Waswa the local firm would be expanding into other East African countries soon, adding that there was a vast untapped market that needed to be capitalized on.

" We have a huge market and only 130,000 people taking up retirement benefit schemes," he said. “We have to tap into this."

The financial services provider has been making strides to post pension penetration in the country, having launched a digital pension solution for workers in the informal sector dubbed Mobikeza.

The product targeting youth, Jua Kali artisans and workers in Micro-Small and Medium-Sized Enterprises is aimed at increasing pension penetration in the country.

Currently, retirement benefit uptake in the country stands at a low of 20 per cent compared to 80 per cent coverage in the developed economies, due to the high involvement of the human capital in the informal sector.

“Local firms getting an opportunity to partner with multinationals is a very welcome theme. It will largely help with the Retirement Benefits Authority’s plan of increasing pension coverage to 30 per cent by 2024,” RBA chief executive Nzomo Mutuku said.