Developers fail to keep up with middle income housing demand

•Middle-income population in Nairobi is expected to increase by 5.6 per cent to reach 250,000 households by 2024

•This is despite an estimated 3,000 housing units for the middle-income segment being produced annually in Nairobi 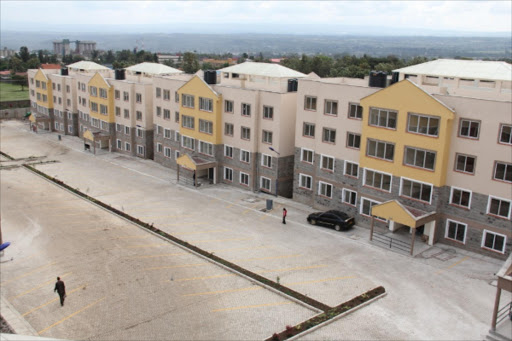 Real estate developers in Kenya are unable to keep up with  demand for middle income housing.

The country, enjoys an oversupply of high-end housing, yet there is increasing demand from potential homebuyers in the middle-income market segment.

Developers have  now been asked to capitalise on Kenya’s growing middle-income segment to boost gains.

A survey conducted by Mi Vida- the real estate arm of Actis and India’s largest real estate conglomerate Shapoorji Pallonji- shows the middle-income population in Nairobi is expected to increase by 5.6 per cent to reach 250,000 households by 2024.

This is despite an estimated 3,000 housing units for the middle-income segment being produced annually in Nairobi.

“More people are moving into the middle-income bracket but most project developments are not keeping up with the real demand,” Coulson said.

He added that nodes such as Kilimani, Westlands, Parklands, Lavington, and Kileleshwa would continue to lose their attractiveness owing to supply concentration.

On the other hand, areas like Nairobi West, Roysambu and Ruaka- predominantly rental markets will continue to grow to meet the increasing demand for middle-income housing.

Coulson said that while there was room for middle-income housing development, there were still a number of bottlenecks that the state needed to address.

Among key issues in the real estate market are stalled projects as a result of delayed licensing processes by both county and national governments as well as poor financing structures with Kenyans unable to access mortgages.

“If we can get policies that can support mortgages then it will be good for developers because the demand is there,” he said.

According to the 2019 affordable housing yearbook published by Centre for Affordable Housing Finance (CHAF), only 26.1 per cent of urban dwellers own the houses they live in, the main constraint being access to financing instruments.

Data by the Central Bank of Kenya shows total outstanding mortgage debt stood at about Sh223 billion in 2017, or 2.7 per cent of GDP, with only 26,187 active mortgage loans.

Housing PS Charles Hinga has in the past indicated that 18,000 of these mortgages are on concessional rates to employees of banks, corporations or government.

Coulson said most Kenyans don’t have confidence in purchasing a new home, adding that in order to change this, the government needed to device a way to get lenders to reduce interest on mortgages to boost homeownership.

Banks are currently the main providers of mortgage finance with 77.5 per cent of all mortgage lending originating from six banks out of a total of 43 banking institutions in the country.

Post a comment
WATCH: The latest videos from the Star
by CYNTHIA ILAKO Business Writer
Business
07 February 2020 - 04:00
Read The E-Paper