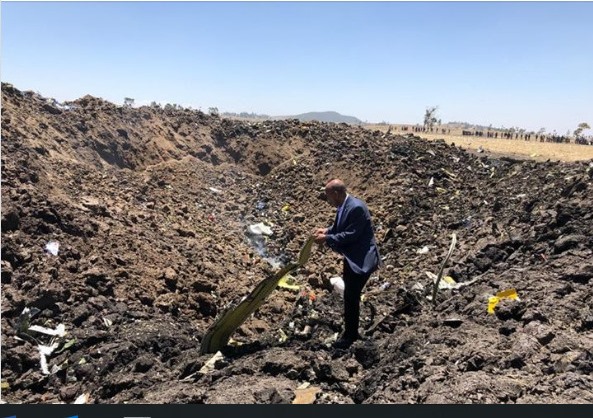 Kenyan Authorities are after four Indonesians suspected to have been on a bribing mission to lure families of the victims of the Ethiopian Airlines ET302 to switch lawyers.

According to our source privy to the matter,  the police and immigration officers were tipped off the happening by a friend of a family member represented by Clifford Law Offices.

The four: Ivan Henry, Vini Wulandari, Gustavina Komala Gani and Mohammad Narobby have since been summoned by the department of immigration to face possible deportation if a letter seen by the Star is anything to go by.

An official at the Immigration department however declined to comment on the matter, saying that his boss at the Intelligence segment will issue official position on the matter.

''The undersigned have been summoned to report to Immigration office under section 49 (8) of the Kenya citizenship and immigration Act 2011,'' the Immigration Department letter dated November 27 read in part.

The four are said to have caught offering cash to lure families into switching legal representation to Steve Marks of Podhurst Orseck in Florida and a New Jersey lawyer, Arthur E. Ballen.

Confession by some of the suspects reveals that that their objective was to bribe local lawyers and family members in an underground bid to see Steve C. Marks of Podhurst Orseck and Arthur E. Ballen take over the representation of cases against Boeing in Chicago, USA.

For instance, Vini Wulandari, one of the suspects, would contact the families with the pretext of providing news about the court case in Chicago and offering “comfort” for the families’ tragic loss.

Once the family had agreed to meet, they would offer the victims’ families money to switch lawyers.

Another suspect, Ivan Henry, confessed that they were bribing local lawyers up to $30,000 (Sh3 million) and $20,000 (Sh2 million) to plane crash victims' families.

A Kenyan representative of the Kreindler and Kreindler LLP, one of firms already representing families of those who perished in the crash had been contacted by the Indonesians and he is planning to take action in court.

Law firms are battling it out for a piece of compensation funds from Boeing which in September announced plans to begin to paying $50 million(Sh5 billion)in financial assistance to the families of more than 300 victims of the two737Max crashes which occurred in February and March.

Bob Clifford, who represents dozens of families affected by the March 2019 Ethiopian Airline has since disputed the offer, terming it as 'disingenuous' and 'vague' according to CNN.

According to a Montreal convention by the International Civil Aviation Organisation (ICO), families of air crash victims are to be paid a minimum of Sh17 million.

The ill-fated Ethiopian Airlines Flight 302 from Addis Ababa in Ethiopia headed to Nairobi, Kenya crashed on March 10, killing all 157 people aboard.