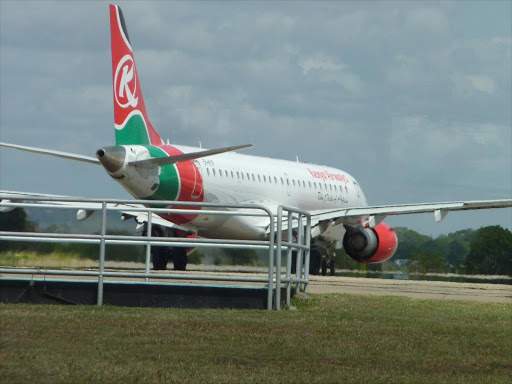 KALPA on Tuesday said the airline’s management is locking out “qualified” local pilots in favour of foreigners, a move that is breaching provisions in the current Collective Bargaining Agreement (CBA).

KQ has commenced interviewing pilots as it seeks to address the biting shortage at the airline, which has in recent times been faced with numerous cancellations and rescheduling of flights.

“KALPA raises a red flag in the manner at which Kenya Airways management is overlooking Kenyan workers in preference to foreigners. We have noted with concern a worrying trend in the airline where foreigners are being hired for jobs that can be done by Kenyans qualified for the same,” General Secretary Captain  Murithi Nyagah said.

Kenya Airways is currently grappling with a shortage of more than 150 pilots. It requires about 600 pilots to operate optimally, according to the association, which is also at loggerheads with the management over the current CBA.

Nyagah said there are about 160 local qualified pilots seeking jobs with the airline, yet KQ management has ignored them and opted to recruit it foreigners, who come with more costlier packages.

“We must encourage, support and promote our very own. Let us do our part in addressing unemployment in the country by embracing our people,” Nyagah said.

Assistant General Secretary Dzochera Warrakah said: “We have no objection for expatriates to be hired but if Kenyans are available to take those places, preference must be given to Kenyans.”

Kenya Airways management and its pilots have been on a pull and shove  as they continue to trade blames for the woes at the loss making carrier, which reported a  Sh8.56 billion net  loss for the half-year of 2019.

The loss has been blamed on high operational costs, including recurrent and operational expenditures, which have continued to drag the national carrier into the red for five consecutive years.

Management has also pegged the high costs on the ongoing expansion on new routes.

“We bare large costs on expansion. We have to keep the load factor as high as possible even as we take a loss in early stages,” Chairman Michael Joseph said at a briefing recently.

The Embraer therefore serves as the entry fleet for employment of pilots, both Captains and First Officers.

“This is the standard mode of promotion and movement of pilots within the organization. In this respect, attempts by KQ to get foreigners come in directly as Captains on the Boeing 737 is a move that obviously bypasses suitable Kenyan Pilots on the Embraer,” KALPA has said.

“This move obviously denies Kenyan Captains on the Embraer from proceeding to their rightfully earned positions on the Boeing 737,” Nyagah noted.

KQ management has blamed the Kenya Airline Pilots Association for trying to sabotage the carriers’ operations after they differed on CBA and hiring ...
Business
3 years ago
Post a comment
WATCH: The latest videos from the Star
by MARTIN MWITA Business Writer
Business
12 November 2019 - 20:27
Read The E-Paper