Milk production goes up by 19 million litres monthly since May

Milk production up by 19 million litres since May.

• In Africa, Kenya tops the list of countries in Africa with high milk production at 5.2 billion litres annually. 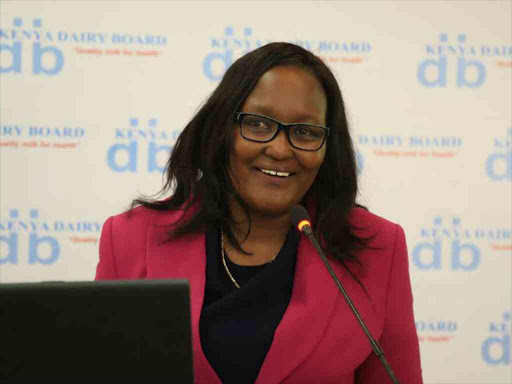 Milk production has increased by 19 million litres, thanks to good weather, according to the Kenya Dairy Board

Kibogy said in January, milk production was highest at 68 million litres due to the good short rains season in 2018.

“The country then experienced a dry spell that went on till May. This resulted to a monthly drastic drop in milk production by 27 million litres,” she said in a telephone interview.

She said the rise in production is expected to continue up until the end of August,” she said.

The MD however said that the producer price of milk has gone down due to the demand and supply factors.

“When supply is up, demand goes down hence the decrease by about Sh3 to Sh2 at the farm level,” she said.

Kibogy said on average, the price of a litre of milk at the farm gate is going at Sh30.

According to 2018 UN-Food Agricultural Organisation statistics, globally milk prices are highest in China at Sh47 and USA at Sh41 due to the strong economics of the countries and also the dynamic of populations.

Brazil is at Sh36, Sh33 for New Zealand, South Africa at Sh31 while Uganda prices are at Sh22.

In Africa, Kenya tops the list of countries with high milk production at 5.2 billion litres annually, followed by Sudan at 4.6 billion, while South Africa, Tanzania and Uganda are at 2.8, 2.5 and 2.2 billion respectively.

Kibogy however said the cost of production has been a big challenge in Kenya averaging at Sh20 to produce a litre of milk.

She said processors cannot be able to reduce the burden to farmers because they have to meet the cost of the milk transporters, distributors in addition to the cost of processing which is very high.

“The farmer takes the biggest share in this value chain but they need to manage their farms properly and work on feed management to be able to make money in dairy. We are also researching on how to cut down the cost of production in the sub sector so that farmers can maximize on profits,” said Kibogy.

He said the coolers will enable farmers sell their milk both in the morning and evening.
Counties
1 year ago

Demand for milk on the increase due to population growth.
Business
1 year ago
by AGATHA NGOTHO Science Writer
Business
30 August 2019 - 05:00