•Management has blamed the loss to operational costs which include the return of two Boeing 787s that had been sub-leased to Oman Air.

•KQ share price touched a low of Sh 2.66 on Tuesday 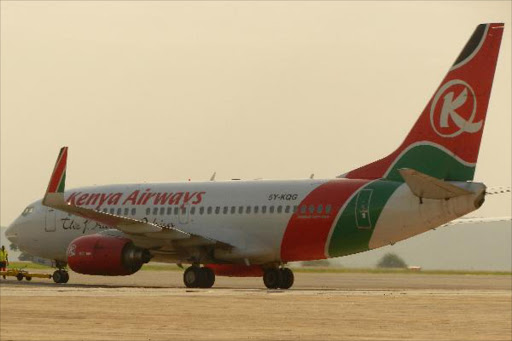 Kenya Airways has reported a Sh8.6 billion loss for the six months to June 30 sinking deeper in the red as increased operating costs came back to haunt the national carrier.

The net loss has more than doubled compared to the Sh4billion loss reported in a similar period last year, even as the airline mulls over replacement of its CEO Sebastian Mikosz who is expected to exit in December.

During the period, the Nairobi Securities Exchange(NSE) listed airline recorded a 15.6 per cent jump in total operating costs to close at Sh61.5 billion up from Sh53.2 billion reported a year earlier.

“The increase was mainly attributed to the return of two Boeing 787s that had been sub-leased to Oman Air and fuel costs which marginally increased by five per cent due to increased flying,” Chairman Michael Joseph told investors yesterday.

The airline has also blamed its loss to investment in new routes and adoption of the the new International Financial Reporting Standards(IFRS 16).

“We bare large costs on expansion. We have to keep the load factor as high as possible even as we take a loss in early stages,” Joseph said at a briefing yesterday.

The operational costs ate into gains made on the total income which went had gone up 12.3 per cent to Sh58.6 billion compared to Sh52.2 billion same period in 2018.

These includes revenues from routes such as New York , Libreville , Mogadishu which were opened in the second half of 2018, which according to the management, they helped increase passanger numbers by 6.6 per cent to hit 2.4 million.

Passanger revnue grew by 5.8 to Sh42.6 billion, Joseph noted. Total assets during the period stood at Sh212.4 billion up from Sh136.6 billion.

Mikosz said the airline will be seeking among other reliefs, taxes on spare parts and railway development levy normally charged on imports.

“These are some of the taxes dragging down our external competitiveness,” Mikosz told jounalists at the briefing in Nairobi.

He announced his exit in May this year on “personal grounds” with his last day in office set for December 31, five months before the end of his three-year contract.

He was appointed CEO in May 2017, taking over from former CEO Mbuvi Ngunze with his more than 20 years experience in executive management in both the public and private sector being counted on to help KQ recover.

This comes even as KQ continues to implement a turnaround strategy after five years of successive loss ,amid operational challenges which include frequent cancellations, that totaled 52 flights in the first 18 days of August.

It is reported to have delayed 40 per cent of the successful flights in the first seven months of 2019 while cancelled flights cost the airline at least Sh118 million.

The delays have been blamed on reluctance by pilots to report to work, riding on the current Collective Bargaining Agreement(CBA), where they can be absent for up to 48 hours without providing any medical evidence. The management has also blamed poor infrastructure for delays.

“It is not a secret we have a rigid CBA on workers as we would need some flexibility on expansion,” Joseph explained, “We had to accommodate more operations, flights, in limited infrastructure.”

He said the management has also been pushed into nationalize the airline.

KQ had a net loss of Sh5.6 billion the year before, blamed on high operational costs mainly fuel and recurrent expenditure. The national carrier has been implementing a turn around strategy for the last three years.

This year, the management tried to push a take over of Jomo Kenyatta International Airport (JKIA) management in a 30- year concession, with the hope of turning around its fortunes.

The idea however sparked a storm led by the Kenya Aviation Workers Union(KAWU) who opposed the move. Parliamentary moved to probe the proposal which has since been halted.

KQ posted a Sh7.55 billion net loss for year ended December 2018. Its worse loss was however in 2016 when it reported a Sh26.2 billion loss after falling deeper from the Sh25.7 billion loss reported in 2015.

The losses continue even as top managers go on to drawing millions in salaries and allowances.

Managers and consultants have been reported to take home up to Sh70.5 million monthly on salaries of between Sh1 million and Sh8 million.

The government has been on a charm offensive to secure more routes for the struggling airline, evidenced by President Uhuru Kenyatta's foreign trips, where he has been vouching for Kenya Airways.

The most recent was this month's official trip to Jamaica where he proposed an air transport collaboration and linkage between the two countries.

Financial support to KQ include the recent writing-off of a Sh24.2 billion loan by government , bringing to focus the viability of taxpayers’ money sunk in the troubled airline.

In November 2017, government through Treasury and 10 local banks agreed to convert loans worth Sh44.2 billion to equity.

In April this year, it emerged KQ spends a whopping Sh14.7 billion annually to service leasing contracts it entered to acquire 20 aircrafts.

Loan servicing is reported to account for up to 11 per cent of the airline’s operating costs, which is more than double the five per cent global average.

Meanwhile, local lenders which agreed to convert debt into equity, among them KCB, Equity and CBA, have faced an uphill task in trading on the airline's shares at the Nairobi NSE.

They suffered a combined paper loss of Sh8.6 billion in May when the airline's shares dipped below the Sh7.78 per share price at acquisition, to below Sh4. It touched a low of Sh 2.66 yesterday.