Peak season at the Coast off to a good start

• Majority of the hotels in the North and South Coast have said they are between 70-80 per cent booked for holiday season, with a good number expecting to be fully booked as the month kicks in. 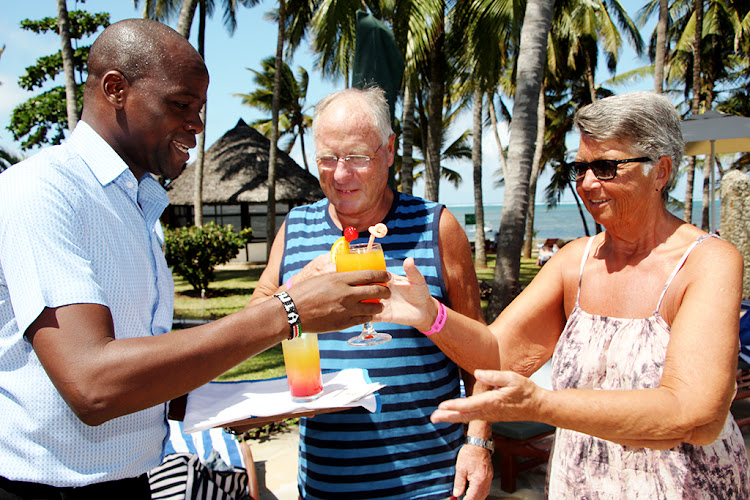 Travelers Beach Hotel Sales and Marketing Manager Wafula Waswa [left] serves a welcome drink and to the hotel return clients Mr, Birger Peterson and His Wife Birgit from Denmark. Mrs Peterson and her husband had visited the Hotel to celebrate her 73rd birthday. Millions of international guests are expected to visit coast resorts this year during the high tourism season which begun this early this Month.
Image: COURTESY

Hotels at the Coast have recorded high bookings as schools close for the August holiday, with the industry reaping from improved security in the region.

Majority of the hotels in the North and South Coast have said they are between 70-80 per cent booked for holiday season, with a good number expecting to be fully booked as the month kicks in.

This signals good tidings for the industry which has also projected good business going into the traditional high season which runs between October and December.

“We are currently 65 per cent booked but we are expecting it to hit 80-90 percent now that schools have closed for holdidays,” said Waswa Wafula, Sales Manager, Travellers Beach hotel.

Waswa also said that most of the visitors were domestic tourists who are returnees to the hotel, they also have a good share of international arrivals due to political stability in the country.

“ The tranquil political environment in the country has been really good for business in the tourism sector as we are on the third year of the Jubilee administration,” said Kenya Association of Hotelkeepers and Caterers executive officer,Sam Ikwaye.

“The national and county governments have also invested in the infrastructure boosting the sector with expansion of the Standard Gauge Railway and increased airline frequencies to tourism destinations,” Sam added.

Regional low cost carrier, Jambojet on Monday announced that they were scheduled to increase frequencies to the Coastal towns of Mombasa, Ukunda (Diani)) and Malindi in the month of August 2019.

The airline will operate 48 weekly flights to Mombasa up from the current 40.

Ukunda and Malindi will have three additional weekly flights moving the frequency to twice daily.

During the Kenya Association of Hotelkeepers and Caterers annual symposium held in early July this year Tourism Cabinet Secretary Najib Balala noted that Kenya’s tourist numbers had slightly dropped in the first six months of the year.

The Tourism CS said the country recorded 921,090 international tourists. arrivals between January and June, compared to 927,797 arrivals over the same period last year.

“This figure is slightly lower compared to last year by about one per cent. However, we are upbeat that the sector will grow by about 10 per cent in the remaining six months of 2019,” Balala said.

Balala said there is need for government and tourism stakeholders to work together to start implementing National Tourism Blueprint (NTB) 2030.

Post a comment
WATCH: The latest videos from the Star
by SUSAN NYAWIRA Business Reporter and Journalist
Business
02 August 2019 - 05:00
Read The E-Paper