•The 450km Mombasa-Nairobi Pipeline was operationalized in July last year 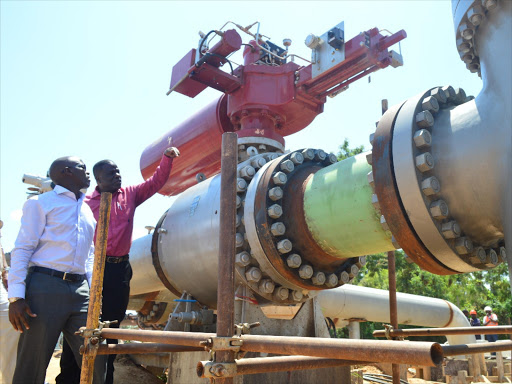 Eng Billy Aseka of KPC demonstrates how the pipes will transport oil during a tour at the KPC yard in Changamwe, Mombasa.
Image: JOHN CHESOLI

Kenya Pipeline Company (KPC) will outsource the services of a contractor to investigate the cause of the recent oil spill in Kiboko, Makueni county, the management has said, even as it remains concerned over encroachment on its land.

Chairman John Ngumi on Tuesday told journalists in Nairobi the tendering process will commence “soon”, to find the suitable individuals for the audit of the new Mombasa-Nairobi pipeline.

The 450km Mombasa-Nairobi Pipeline, operationalised in July last year, developed leakage problems barely a year after it began moving petroleum products from Mombasa to Nairobi, a move that has raised questions over the quality of work.

Line 5, as it is commonly known, was developed by Lebanese-Zakhem Construction through a Sh48 billion tender. Oil spillage hit Kiboko natural springs along the new pipeline on March 30.

According to Ngumi, KPC will commission two types of audits-a contractual audit and an inline audit, which will involve a technical aspect of testing the pipe from Mombasa all the way to Nairobi.

“An instrument will be placed in the pipeline which will analyse the quality, corrosion and identify whether there is a leakage,” Ngumi said at the KPC headquarters, “This will determine whether we have what was meant to be delivered. As at the moment, we don’t know what happened.”

He said the process is a top priority for the company which remains committed to ensuring fuel handling is of the highest standards.

“Kenyans deserve the best. We must ensure the pipeline is up to standard,” Ngumi said.

He told the committee, chaired by Nyeri senator Ephraim Maina, KPC was yet to determine the exact cause of the spillage.

Munyes, however, said the company was in the process of procuring new leakage detectors for the new pipeline, which will ensure speedy reactions in the future. It was revealed that the leak detection was not included in the design stage.

Meanwhile, the KPC management has raised concerns over encroachment on land along its pipelines.

The most affected areas include Kaptembwa, in Nakuru, where oblivious of the dangers, residents have encroached on almost a four-kilometer stretch.

The area has been turned into a busy informal market sitting on top of two pipelines-Line II and Line-IV which runs through to the Western region.

Under the law, landowners or persons living near an oil pipeline leave at least 30 meters away from the line.

“These guys are sitting on a time bomb. In the event of rapture, the mess will be big. It is also affecting our maintenance programmes,” said Walter Ochieng, security officer at KPC-Nakuru.

The residents are now facing forceful eviction according to KPC which will be conducted anytime soon. A notice was issued in May but the residents have refused to move.

“Where do I go to? I depend on this place to do my business but if given an alternative, I will move,” said Consolata Achieng, a fishmonger who has operated in the area for 15 years.

“We have no market designated for us. We are asking the government to give us an alternative, we know we are on Kenya Pipeline’s jurisdiction but we have nowhere else to go,” another trader, Josephat Karanja who sales second hands clothes told journalists.

Officials could not explain how KPC would recover Sh1 billion in oil spillage
News
3 years ago
Post a comment
WATCH: The latest videos from the Star
by MARTIN MWITA Business Writer
Business
12 July 2019 - 05:00
Read The E-Paper