How Rotich plans to spend your money in Sh3.02 trillion budget

Country mired in debt, forcing government to borrow from Peter to pay Paul

• Education r will once again take the lion's share, an estimated Sh473.3 billion. 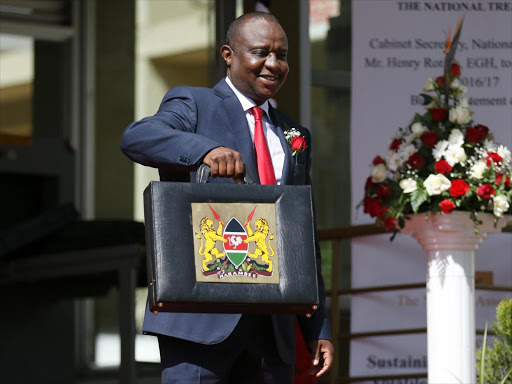 Rotich will read the 2019-2020 budget and table the budget policy statement in Parliament.

The current budget is Sh3.01 trillion; the new one will be Sh10 billion higher.

The deficit will be an estimated Sh607 billion.

The headache is how the government plans to fund its proposed expenditure at a time when the Kenya Revenue Authority is struggling to meet its targets.

The country is deeply steeped in debt, forcing the government to literally borrow from Peter to pay Paul.

The government is expected to borrow more in the next financial year to bridge the budget deficit of about Sh607.8 billion That's  Sh45 billion higher than the deficit for the current year, Sh562 billion.

Concerns are growing over the surging public debt that hit Sh5.4 trillion, according to the Central Bank's latest update.

Even so, the budget as a share of Kenya’s Gross Domestic Product is expected to decline by 4.2 per cent to 28.1 per cent, compared to 32.4 per cent this financial year.

This drop has been attributed to reduced allocation to the Consolidated Fund Service (CFS) in 2019-20 to Sh805.8 billion, compared to Sh962.6 billion on a lower debt obligation.

The Budget and Appropriation Committee reports that the proposed budget will allocate a total of Sh2.45 trillion to the three arms of government.

The three were allocated Sh2.23 trillion in the current financial year; the Executive took the largest portion, Sh1.69 trillion.

In the new budget, the Executive has been allocated Sh1.84 trillion, Parliament Sh43.78 billion and the Judiciary Sh18.88 billion.

In June last year, the National Treasury allocated Sh17.3 to the Judiciary but later slashed it to Sh14.5 billion through the Appropriations Act. The reduction was condemned by Chief Justice David Maraga.

Just hours to the budget presentation, it was not clear how much Rotich will allocate to counties. MPs and senators have locked horns over the Division of Revenue Bill that spells out the amount due to counties from the national revenue.

While the Senate wants Sh371.6 billion as presented to the Parliamentary Budget Committee, MPs want that slashed to Sh314 billion. The allocated Equalisation Fund for the new financial year is Sh5.8 billion, compared to Sh8.5 billion this year.

Panellists at a forum on the division of revenue to counties by the national government on Tuesday accused Treasury and MPs of frustrating devolution through the skewed and delayed allocation of funds.

Yesterday, the Kenya Human Rights Commission said it was filing an injunction at a Machakos court to stop the Treasury CS from reading the budget today.

"We are aware that the Division of Revenue Bill, 2019, that dictates the sharing of revenue raised between national and county government is not passed and is under mediation," KHRC said in a statement.

The rights group termed tabling of the budget before the Bill is passed as illegal and unconstitutional.

Rotich to present Sh3.08 trillion budget to MPs next week

Counties will receive 371.6 billion, 12.1 per cent more than this financial year.
Business
3 years ago

On Tuesday, Katiba Institute counsel Christine Nkonge had warned that If the Division of Revenue Bill, 2019, is not passed by Thursday (today), a fresh budget will have to be drawn up.

The Education sector, as usual, will take the lion share — Sh473.3 billion compared to Sh439 billion this year.

The sector has prioritised recruitment of additional teachers to support 100 per cent transition to secondary school and continued support to Free Primary Education and Free Day Secondary Education through increased capitation.

Other priorities include support to Special Needs Education and providing examination fees for all students sitting the KCPE and KCSE tests.

Other sectors expected to take a huge chunk of the budget include Energy, Infrastructure and ICT. They have been allocated a combined budget of Sh406.7 billion, up from Sh403.5 billion this year.

Others are National Security at Sh139.1 billion up from Sh137.8 billion; Defence Sh121 billion, Health Sh93 billion and Agriculture at Sh59.1 billion.

The Treasury will be unveiling the ambitious budget against the backdrop of the slow pace in revenue collection. KRA is expected to miss this year’s target by Sh118 billion.

This decline is expected despite KRA lowering the target for this fiscal year by five per cent to Sh1.605 trillion from Sh1.69 trillion, the Treasury’s statement of Actual Revenues and Net Exchequer said.

PwC (PricewaterhouseCoopers) says the government is in need of money and it will not hesitate to impose taxes where it deems necessary.

Recurrent expenditure  is expected to account for 78.9 per cent of the budget.
Business
3 years ago

"We should expect the government to work magic in bringing the informal sector into the tax bracket. The Huduma Namba was a slow but sure way towards the goal. Sin tax on gambling, alcohol and cigarette are likely to go up," tax expert Albert Ondoro said.

This year, the government was forced to come up with stringent tax measures to raise funds to support the budget.

Treasury introduced an eight per cent Value Added Tax on petroleum products, a 1.5 per cent levy for the National Housing Development Fund and a kerosene adulteration tax.

It also imposed a tax of Sh20 per kilogramme of sugar confectionery, including white chocolate and it increased excise tax on cash transfers from 12 per cent to 20 per cent and on calls and data from 10 to 15 per cent.

Even so, accountants want the government to widen the tax bracket and seal loopholes to reduce the tax burden on the few taxpaying Kenyans.

In a raft of measures to help streamline revenue collection, the Institute of Certified Public Accountants of Kenya (ICPAK) said the country should also re-negotiate its debt repayment terms.