CBK takes on the corrupt, launderers with new notes

• The announcement comes in the wake of increased cases of fake currencies in the country. 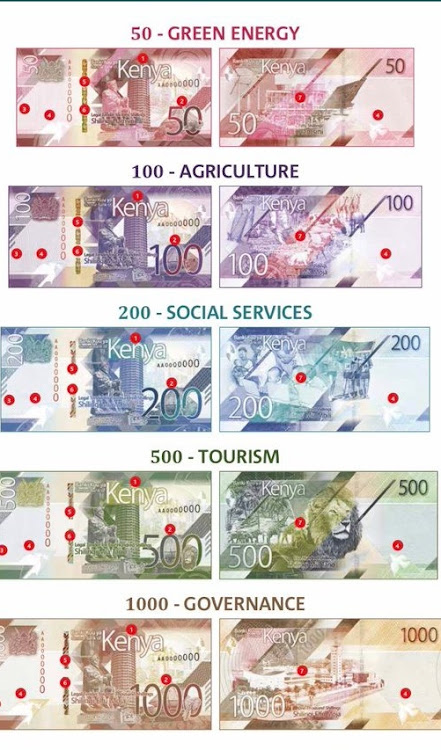 Kenya has unveiled the new generation bank notes and announced plans to phase out old generation Sh1,000 notes by October 1.

"To deal conclusively with these concerns, all the older Sh1000 series shall be withdrawn. By a Gazette Notice dated May 31, 2019, all persons have until October 1 to exchange those notes, after which the older Sh1000 banknotes will cease to be legal tender," Njoroge said.

The announcement comes in the wake of increased cases of fake currencies in the country, with a recent incident being in March when police arrested six people in connection with the seizure of counterfeit notes worth more than $20 million (Sh2 billion) found in a personal safety deposit box at a Barclays Bank branch.

It is also likely to play a major role in the fight against corruption in the country, considering many perpetrators are suspected to be hiding huge cash in houses to escape paper trail after CBK introduced strict transaction laws.

The anti-money laundering rules require bank customers to give a three-day notice to make over the counter transactions of more than Sh10 million, complete with supporting documents such as the source of the money, the purpose for withdrawing funds, the reason why real-time gross settlement cannot be used, and ID/passport copies of persons involved in the transaction.

The move by the CBK to enforce its directive requiring banks and other financial institutions to report cash transactions has been met with considerable opposition in financial, political and business circles, with MPs threatening to reverse it.

In February, the National Assembly’s Finance Committee chaired by Joseph Limo, summoned CBK governor, accusing him of illegally imposing the law on Kenyans.

The Parliamentary Committee termed the Banking Circular No 1 of 2016 as draconian and unjustified, adding that Kenyans were being harassed by banks and could not get access to their money.

Following the passing of the 2010 Constitution, the CBK was mandated to spearhead the production and roll out of the new currency notes.

The Constitution prohibits the use of a person’s portrait on currencies meaning the upgrade is expected to have new features.

In January last year, CBK and De La Rue Limited moved to court to challenge a Public Procurement Administrative Review Board decision that declared the tender issued to De La Rue as unlawful.

On November 30, 2017 CBK awarded a tender for the printing and supply of bank notes to the De La Rue International Limited. However, on December 19, Crane AB requested for review of the tender at the Public Procurement Administrative Review Board challenging CBK decision to award the tender to De La Rue.

A month later, PPARB annulled its judgment and allowed the request for review of the tender, setting aside CBK’s decision to award the tender to De La Rue Limited.

Unveiling the new notes, Njoroge said they have a unique theme and features–including the iconic Kenyatta International Convention Centre (KICC), the big five wildlife and will be easy to use to the visually impaired.

"The new bank notes bear a significant aspect of our nation, and like the coins, will serve as a means of passing knowledge, conserving culture and promoting our global uniqueness," Njoroge said.

There is a lot of unbanked money is hidden under people’s mattresses.
Opinion
3 years ago
by VICTOR AMADALA Business Writer
Business
01 June 2019 - 16:03