•Safaricom and Airtel have received a combined 5 million new numbers with the prefix 01 for use by the consumer.

•An online platform has been put in place to ease application for the new numbers, view the entire numbering resources available and track their requests. 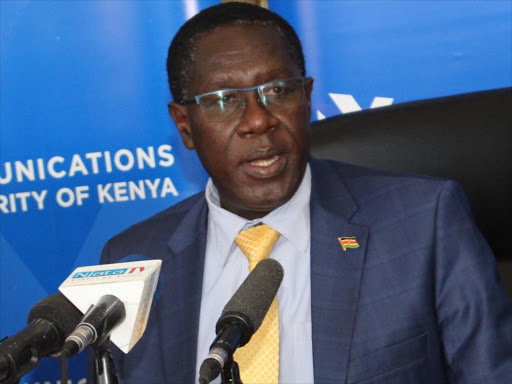 You may soon have access to a new mobile number starting with the digits 01, Communications Authority has said.

“The numbers are local and everyone should be aware and not panic whenever they receive calls under the new prefix,” CA Director General Francis Wangusi said

The regulator announced yesterday that the prefix 07xx is exhausted.

According to the National Numbering Plan developed in 2002 by the authority, each prefix provides for a capacity of 100 million numbers.

The regulators second quarter sector statistics report ending December 2018, shows that the number of active mobile subscriptions in the country grew by 6.2 per cent from the previous quarter to stand at 49.5 million.

Mobile penetration grew to 106.2 million from 100.1 million. This was attributed to multiple SIM cards ownership among Kenyans.

Further, the Kenya Integrated Household Budget Survey report published by the Kenya National Bureau of Statistics in 2018 indicated that at least 30 per cent of Kenyans owned more than one SIM card.

While announcing the changes, Wangusi said that Mobile service providers Safaricom and Airtel have received a combined 5 million new numbers with the prefix 01xx for use by the consumer.

Safaricom has 2 million of the new prefix numbers while Airtel has 3 million.

“In view of the emergence of new technologies and numbering requirements resources, it has become necessary to introduce the new 01 prefix also with a capacity of 100 million,” CA Director General Francis Wangusi said.

He further attributed the changes to rising demand for SIM cards, mobile data, and machine to machine communications.

Introduction of the new mobile number prefix has no cost implications on the consumer.

Mobile number prefix 030 has been reserved for the machine to machine communications.

As of last year, Safaricom market share for mobile subscriptions dropped by 0.9 per centage points to stand at 63.3 per cent or 31.32 million subscribers.

The market shares for Telkom Kenya Limited (4.4 million subscribers), Finserve Africa Limited and Mobile Pay Limited were recorded at 9.0, 4.2 and 0.2 per cent respectively.

In addition to the new prefix, the authority said an online platform has been put in place to ease application for the new numbers, view the entire numbering resources available and track their requests.