The approval by Gambia marked the legal threshold for historic agreement to enter into force.

• AFCFTA was first signed on March 21, 2018, by 44 countries in Kigali, Rwanda making it one of the largest trading blocs since the formation of the World Trade Organisation.

• According to the United Nations Economic Commission for Africa, the AFCFTA has potential to boost intra-African trade by more than 50 per cent. 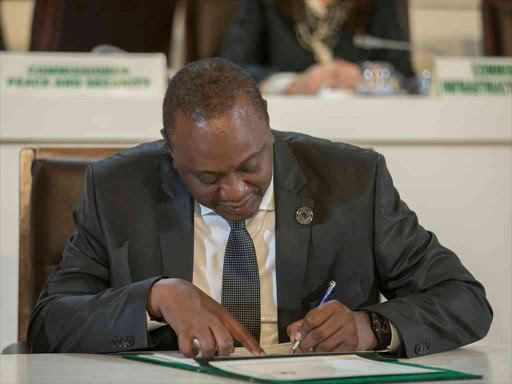 A year after AU member states pledged to create the world largest trading bloc - the #AfCFTA, #Gambia becomes the 22nd country to ratify it, marking the legal threshhold for this historic agreement to enter into force. I cannot overstate the significance of this achievement. pic.twitter.com/Vr4zr20taE

Kenya will be able to extend its trade foothold into all the 54 African nations beginning July.

This follows ratification of the African Continental Free Trade Area Agreement by the Parliament of Gambia last week paving the way for its enforcement.

The West African country was the 22nd to ratify the agreement making AFCFTA meet the minimum threshold needed to make it operational.

According to the chairperson of the African Union Moussa Mahamat, the approval by Gambia marked the legal threshold for the historic agreement to enter into force.

AFCFTA was first signed on March 21, 2018 by 44 countries in Kigali, Rwanda, making it one of the largest trading blocs since the formation of the World Trade Organisation.

To date, the pact has been signed by 52 African countries.

Last May, Kenya and Ghana became the first countries to hand over to the African Union Commission documents ratifying the free trade deal.

This is according to the Integrated National Exports Development and Promotion Strategy unveiled last year aimed at growing exports.

With the new deal, local industries will be able to access a market of over 1.2 billion people with a cumulative gross domestic product of more than $3.4 trillion.

Latest data compiled by the Central Bank of Kenya show Kenya exports earnings from Africa in 2018 dropped 3.8 per cent to Sh216.14 billion compared to Sh224.86 billion reported in 2017.

The regional deal further seeks to remove tariffs on 90 per cent of goods produced within the continent and phase out the levy in the future.

African Development Bank has recommended elimination of all bilateral tariffs and keeping rules of origin transparent around intra-African trade to ...
Counties
2 years ago

According to the Kenya Association of Manufacturers head of membership Tobias Alando, reduction of tariffs and non-tariff barriers within the AfCFTA will transform trade and increase volume of exports.

“This will mean better bargaining power and a boost in commercial activities for many countries guaranteeing productive job creation,” Alando said.

According to the United Nations Economic Commission for Africa, the AFCFTA has potential to boost intra-African trade by more than 50 per cent if import duties and non-tariff barriers are eliminated from the economic bloc.

Trade development officers Kenneth Malot and Christopher Onyango from Kenya Institute for Public Policy Research and Analysis said the trade pact provides a perfect opportunity for the country to elevate her manufacturing contribution to 15 per cent of GDP by and beyond 2022.

In his view, Malot said the achievement is possible due to the potential of increased market access of Kenyan products to other African markets in the central, west and North African regions, which have not been exploited before.

“Kenyan manufacturers would have the opportunity to source raw materials much more cheaply given the reduced tariffs and non-tariff barriers,” Onyango said.