What's the state of health under counties? 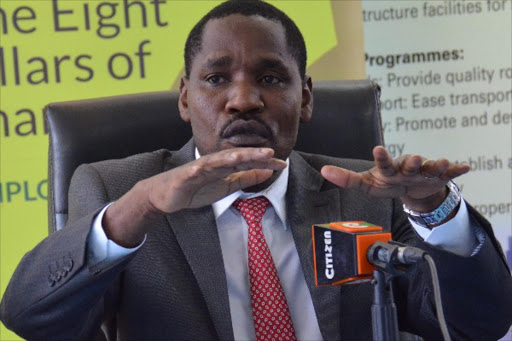 MERU. Council of Governors Chairman Peter Munya adressing the media in his office

Devolution has brought new health facilities and medical equipment to all counties. But health workers are largely dissatisfied.

Nurses and doctors unions — whose members are protesting delayed salaries and promotions in some counties — claim health was better managed by the national government.

Nairobi-based think-tank KPMG Africa diagnoses this thinking in its latest report, ‘Devolution of Healthcare Services in Kenya: Lessons learnt from other countries’.

The report briefly explores Kenya’s state of health before devolution, but devotes most energies into the devolved era and examines whether other countries gained or lost by decentralising health services.

Kenya’s health sector has been heavily centralised since 1963, with power concentrated in Nairobi.

But currently, the national government only provides policy and manages the two national referral hospitals while all other functions rest with the county governments.

Statistics reveal health sector was never a bed of roses under the national government.

A 2010 review performed by the Ministry of Medical Services and the Ministry of Public Health and Sanitation reveals that improvements in health have been marginal in the past few decades and certain indicators have worsened.

The current strikes are also not a new thing. They became annual especially since medical students in 2009 formed a Facebook group called the Kenya Medical Practitioners, Pharmacists and Dentists Union. It initially agitated for improved welfare of the young doctors. It has since evolved into a proper union but their welfare has not improved.

The WHO Global Atlas of Health Workforce identifies Kenya as having a “critical shortage” of healthcare workers since independence.

KPMG says Kenya has a lot to learn from Ethiopia, Ghana and Thailand, who reaped dramatic benefits after devolving health services. Ethiopia devolved health in 1996. Its system is hugely successful.

The gains were largely achieved through the rapid implementation of the Health Extension Programme where more than 35,000 health workers were sent to work in remote outposts.

“The devolution mechanism entailed districts receiving block grants from regional government and they, in turn, were entitled to set their own priorities and determine further budget allocation to healthcare facilities based on local needs,” says the KPMG report.

Ghana has the Ghana Health Service, responsible for managing and operating most of the country’s facilities and offices.

The GHS subsequently evolved into a more deconcentrated structure with regional and district health offices.

Thailand is in a situation where some facilities have devolved and some have not.

The health centres are given the option to either remain under the Ministry of Health or to devolve to the Local Administrative Organisations, which must have received a good governance award. Second, at least half of the health centres’ staff involved need to be willing to transfer to LAO employment.

KPMG says devolution of health services is not new and most countries are already there or are headed there.

“What is seen in all three countries is that creating the right governance and accountability structure is critical in making devolution and, in the end, service delivery to the patient, successful,” says the report.

IN North Eastern, accessing quality care has been a pipe dream and a luxury since independence. The nearest health centre was, in many cases, 100 kilometres away.

That is slowly changing, especially in the last three years. In Wajir, Governor Ahmed Abdullahi-led county has invested huge chunks of the county budget into the crucial sector.

“We have recruited 170 new healthcare workers and increased the headcount of our staff from 230 to 501. We have operationalised our district and sub- district hospitals in Wajir town, which, for the first time ever, are operational for 24 hours — Habaswein, Bute, Griftu, Buna, Korandile and Khorofharar,” he says.

And in a region where an estimated 581 women die annually from pregnancy-related complications, (according to the Kenya Demographic and Health Survey), 32 new maternity wing extensions have been constructed.

“We have purchased and await delivery of eight new ambulances for the sub-counties. Our facilities are now well stocked with medical supplies, and we are in the final stages of the construction of our medical training center,” he said.

But challenges of labour disputes pitting health workers against their employers abound.

This has prompted a call by the Health CS James Macharia to wrestle the health docket from the counties. However, medics’ strikes were rampant in Kenya even before devolution.

Halima Abdi, a resident of Wajir, said reverting the sector to the national government is “out of question”.

“Health services have greatly improved. There are challenges but I think they can be surmounted,” she said. “Mothers are now delivering to better equipped hospitals and health centres reducing maternal death greatly,” she said.

“Whenever we visit public hospitals, they prescribe drugs and direct patients to privately-owned pharmacies to buy the drugs. It was purely business. That has reduced,” she said.

He says the number of employed health workers has increased by 34 per cent since devolution came.

He says there is a 12 per cent increase in new hospitals since 2013. New health centres have been built countrywide increasing the number by 15 per cent, dispensaries by 21 per cent, maternity theatres 142 per cent, beds 21 per cent, incubators 43 per cent, and laboratories rose 34 per cent.

“Due to the improvement of imaging facilities in different counties clients don’t go to private facilities, ICUs have been opened in Kericho, Meru, Bomet and Kisii,” said Munya.

Ambulance services have gone up by 100 per cent. Before devolution, medicine worth Sh12.9 billion was being bought every month, but now counties buy spend Sh19.2 billion on medicine every month, a 49 per cent increase.

However, many counties have reportedly defaulted on debts to Kenya Medical Supplies Agency. For instance, most hospitals in Nairobi lack medicine because the county owes the supplier Sh120 million. Mission for Essential Drugs & Supplies, another drugs supplier, has now insisted on cash before supply because of rampant default by counties.

Most counties spend more than 30 per cent of their budgets on health, compared to the six per cent the national government used to spend. Embu and Meru counties, for instance, spend 40 per cent.

Munya says the number of doctors serving in the counties has increased from 1,315 three years ago to 1,798 today, a 37 per cent increase, whereas nurses in service were 9,846 and are now 11,683, a 19.7 per cent increase. However, a section of medics complain their salaries are delayed, sometimes up to the 20th of a given month, and their promotions have not been effected.

The governors blame the national government for this backlog, citing bad record keeping at the Ministry of Health.

In Meru county, Governor Munya says that automation of cash collection services at the Meru Level Five Hospital has improved. They are currently collecting more than Sh300,000 every day.

But Munya claims that since May, 89 medical practitioners have been promoted among them 42 doctors, 24 pharmacists and nine nurses and eight public health officers. He says 107 requests are currently being evaluated by the public service commission.

This year, the county government employed 242 nurses to address a staffing shortage. But Mt Kenya Clinical Officers Association chairman Wilson Namu claims the county still has a shortage of about 400 nurses, 250 clinical officers and about 30 doctors. “We are investing about Sh2 billion annually into the health sector in Meru alone. It is for you now to judge if health has done better under devolution compared proportionately to the last 50 years under National Government,” Munya says.

In July, as doctors in other counties were busy preparing to strike, those at the Coast Provincial General Hospital were preparing to perform the first open heart surgery at the institution since its establishment in 1957.

It was also the first one in a public hospital outside the Kenyatta National Hospital in Nairobi.

“This facility has been under the hands of the national government and for the past 50 years I do not remember a day they were able to do an open heart surgery,” says Governor Hassan Joho.

Devolution is really working and Kenyans can attest to this, he says.

The hospital is currently undergoing a multi-million facelift and will in the next three months be transformed into a teaching and referral institution.

Joho says in the next three months they will also set up an oncology centre at the institution.

“Our two doctors have already been sent to specialise in cancer treatment to be able to work in the facility once it is established,” says Joho.

Mombasa county government has further advertised tender for construction of 10 new county hospitals in the constituencies to ease congestion at the CPGH.

“We want to construct a county public hospital in each of the six Mombasa sub-counties. The bigger sub-counties will have at least two such facilities,” he says.

He says the health sector took about 30 per cent of the county budget for the 2015/16 financial year, which translates to almost Sh2.2 billion.

But residents are still calling for better service delivery.

Dzoro Jefwa, a patient at the hospital, says the county should also curb the doctors and nurses shortage at the facility.

“They are doing a good job, but the painting and the upgrade is not enough if we do not have adequate health staff at the facility,” says Jefwa.

Aisha Kadzo, another patient, says the county should also upgrade the maternity wing.

“Our mothers should have a nice place to deliver, let them upgrade that section and employ more nurses in all other health facilities,” she says.

Post a comment
WATCH: The latest videos from the Star
by JOHN MUCHANGI
Sasa
09 September 2015 - 05:30
Read The E-Paper